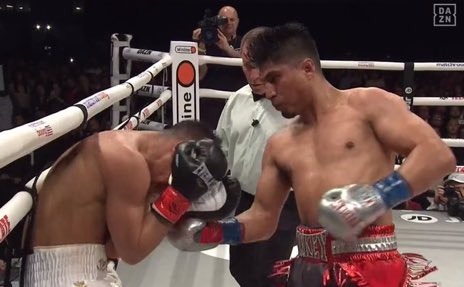 Garcia, who lost his welterweight debut losing all the rounds on the scorecards against Pound for pound entrant Errol Spence after moving two weight classes up back in March 16, dropped Vargas in the fifth round and dominated the right from then on to win a decision.

The fight started out slow for the former lightweight champion as Vargas dominated the opening rounds but Garcia grew into the fight and began showing his class in round three when he wobbled the more experienced welterweight.

Vargas who had all the physical advantages heading into the fight – height, reach and size had so much difficult handling the power of Garcia and was found on shaky feets in more than one occasion during the fight.

Garcia Speaking After The Fight

“I started to hurt him as the rounds went by,” Garcia said. “I took him closer to the corner and landed a good right hand that put him down. I think he definitely felt the power and, after that, it seemed like every so often I would hurt him again. So, I really started to get the rhythm of things and I just kept going. I felt like my speed, my power was all perfect, and I was able to put it into effect against a bigger guy.”

Garcia gave Vargas a good fight, sending him to the canvas in the fifth round with a perfect right hand and speaking at the end of the fight, Vargas couldn’t help but give Garcia credit for such a good performance and also admitted, he would also love a rematch.

“I got a little confident in the fourth round, when I hurt Mikey,” Vargas said. “I thought I hurt him in the white corner, in the neutral corner. But, you know, I seemed to lighten up. But then again, Mikey fought a great fight. His timing was pretty good. It was precise. I give him credit. I don’t take anything from it. You know, I think it was a learning experience for me.

“I thought it was a very close fight, very entertaining for the people here in Frisco. You know, I hope that they enjoyed it. I’m happy I was able to give them a good, entertaining fight, their money’s worth. And I would like a rematch. I’m not arguing or disputing the decision, but I did think it was close. I think the knockdown made a difference. I really got overconfident with his power. I do think he has a good pop. You know, and credit to Mikey.”