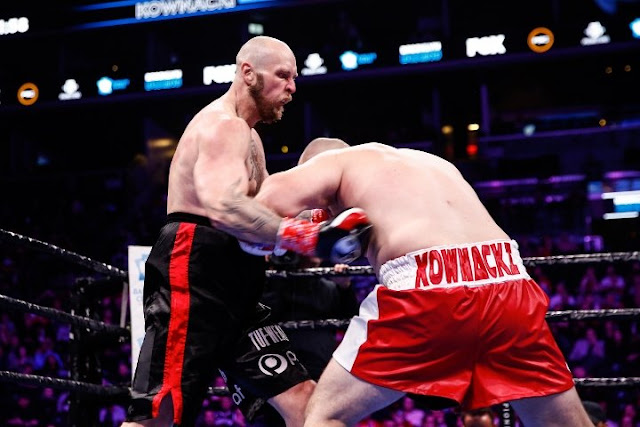 Robert Helenius executed a perfect upset, defeating formerly unbeaten contender Adam Kownacki, stopping him in the fourth round of their WBA Heavyweight title eliminator on Saturday 7th of March, at the Barclays Centre in Brooklyn.

Kownacki looked well on his way to a Knockout victory after landing a couple of flush punches on Helenius, who looked exhausted before uncorking a big right hand that floored the well favoured polish heavyweight and despite his survival, he was no way ready for the unslaught Helenius followed up with to force the stoppage.

Helenius battered the disoriented Kownacki with continous unanswered punches that prompted the referee David Fields put an end  to the Fox main-event. The heavily favoured polish fighter was still on his feet when the fight was stopped.

Kownacki was still the favourite to win the fight and was way ahead on the score cards by the time the fight was stopped. Kownacki visited the canvas after receiving a big right hand and a short left from Helenius and after getting back to his feet, Helenius battered him with a flurry which with his efforts to escape couldn’t escape the inevitable.

Kownacki was the aggressor from the opening bell taking the fight to Helenius, who fought mostly on the back foot and waited patiently for the perfect opportunity to counter but up until the stoppage, was no match for the the polish fighter. Minutes after the opening bell Helenius was sent to the ropes with a right hand from Kownacki, who had no issues making known his intent.