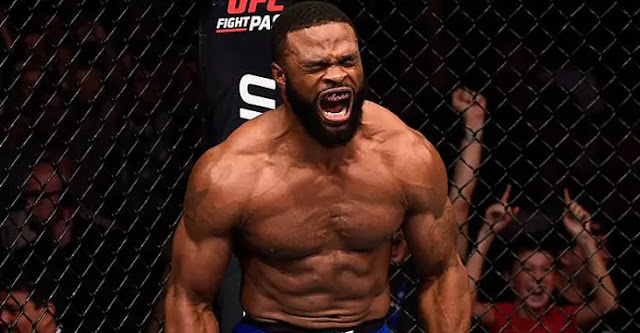 Tyron Woodley Vs Leon Edwards was to take place as the headlining bout of UFC On ESPN+ 29. However, due to the COVID 19 outbreak, the event has been cancelled and though there are hopes of bringing it back on track with a different location, no announcement has been made on the topic.

The United Kingdom has a ban on huge gatherings die to the Corona Virus outbreak and this has hindered the event from taking place in the UK this coming weekend.

However the measures the UFC will take to save the fight card, the main event clash between Leon Edwards and former welterweight champion Tyron Woodley has been cancelled and this was first announced by Leon Edwards, who announced it via social media.

Tyron Woodley was last seen back in March 2019, when he lost his welterweight title to Kamaru Usman and has since been out looking for a big fight. Woodley defended the title four times successfully before losing it to Usman.

Woodley had initially planned to fight in the US and despite claiming, he won’t be going overseas to fight he accepted the Leon Edwards fight in the UK. Edwards is riding on a four fight winning streak which dates back to 2015, when he lost a decision to the now reigning UFC welterweight champion Kamaru Usman.

Leon Edwards defeated Rafael Dos Anjos back in June and would have attempted taking out another former Welterweight champion in a row in the main event of UFC On ESPN+ 29 in his hometown.

UFC on ESPN+ 29 was supposed to take place at the O2 Arena in London and more information on whether the fight will take place or not will be communicated in the future. For now nothing has been announced.