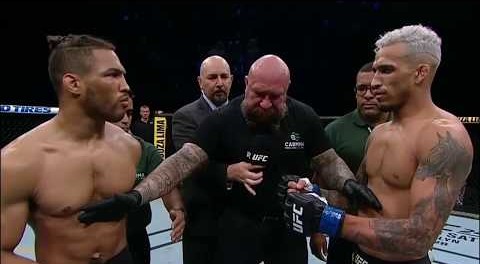 Charles Oliveira scored the biggest win of his career with a submission being over Former interim title challenger Kevin Lee in the main event of UFC ON ESPN+28 on Saturday night at the Ginasio Nilson Nelson in Brasilia Brazil.

Charles Oliveira, constantly maneuvered into submission attempts each takedowns Kevin Lee brought to the table till, he was finally able to finish off Lee with a Guillotine Choke 29 seconds into the third round of their clash in front of a zero attendance due to the COVID 19 epidemic.

Oliveira, who has now won seven in a row via submission has now equalled Donald Cerone’s record of 16 finishes in the UFC and now hopes to secures world title shot. Saying he will be present at UFC 249.

Kevin Lee, who majorly uses his ground game gave no one a surprise when he went for the take down early in the fight after the feel out period but that was immediately welcomed by Oliveira, who transformed that offence into a series of submission attempts which included leg locks and Arm Locks.

In the second round, round Lee started out showing his much improved stand up game and after he had exchanged shots to satisfaction, went in for a take down and again Oliveira turned the offensive attack to his advantage put him on a series of submission attempts, which he somehow survived.

However the second round ended with Lee taking the top position in the best offensive he had put up through out the fight. He forged his way to the top position landing blows and elbow. However, his success didn’t last long as he was submitted in the third round with a Guillotine, 29 seconds into the third.

Kevin Lee protested the Loss ,saying he never taped out but the replays showed he tapped out a couple of times before the referee eventually stopped the bout.