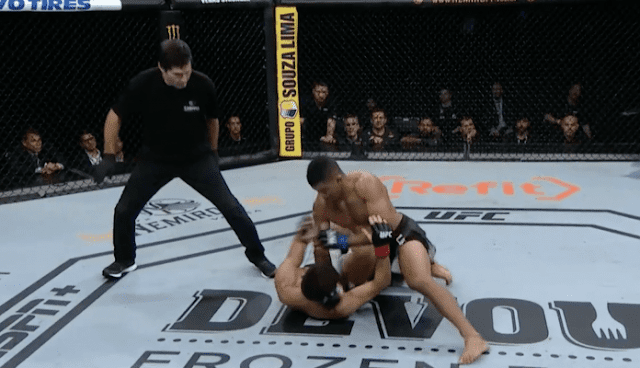 Gilberto Burns defeated UFC veteran Damian Maia with a first round TKO on Saturday night in the Co- Main Event of UFC On ESPN+ 28 in Brasilias Brasil.

Burns, who continued his success as a UFC welterweight, did what no one had ever done against the tested Veteran, dropped Maia with a devastating left hand finishing him off with a flurry in the opening round. The fight ended at exactly 2:52 of the first round and with that Burns won his fifth straight fight with his last three coming via submission.

The fight ended in the 2:34 minutes into the first round handing Burns his fifth straight win but this didn’t come so easy as he had to fend off takedown attempts from the Maia using his Jiu Jitsu.

“I’ve been following this guy through his whole career,” Burns said about Maia. “I think he’ll be a Hall of Famer. I have so much respect. I’m very emotional right now.”

Maia got connected with a devastating right hand afterwards, which left him dazed and crumbling to the canvas, so Burns followed him up with a Flurry till the referee saw enough to end the fight.

Following the victory Gilberto Burns expressed interest in facing on of the  former champions, who couldn’t finish off Maia.

“I got next — Colby Covington,” Burns shouted. “You gonna see me. I’m gonna beat you up.”