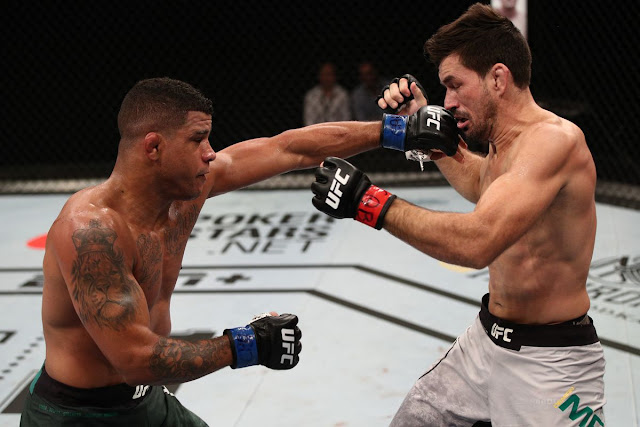 Gilberto Burns sent a massage to the MMA community with a first round TKO victory over Damian Maia in the Co- Main Event of UFC On ESPN+ 28.

Burns, who continued his success as a UFC welterweight, did what no one had ever done against the tested Veteran, dropped Maia with a devastating left hand finishing him off with a flurry in the opening round. The fight ended at exactly 2:52 of the first round and with that Burns won his fifth straight fight with his last three coming via submission.

Burns had nothing but respect for Maia after the fight and expressed it during the post fight interview. Maia, who had never been finished had in the past past somehow manage to finish fights against Kamaru Usman, Tyron Woodley and Colby Covington.

“I’ve been following this guy through his whole career,” Burns said about Maia. “I think he’ll be a Hall of Famer. I have so much respect. I’m very emotional right now.”

Before finishing off Maia, Burns had to fight off a submission attempt from the Veteran who went after a submission after scoring a takedown and looked to showcase his superior ground game and maybe end it with some world class finish.

Burns made use of some good Jiu Jitsu game to stay out of trouble despite the Superior game Maia was bringing and somehow got himself back to his feet.

Maia got clipped with a devastating right hand afterwards, which left him crumbling to the canvas, dazed but not out, so Burns followed him up with a series of shot till the referee intervened to stop the fight.

Following the victory Gilberto Burns sent a message to one of the former champions, who couldn’t finish off Maia.

“I got next — Colby Covington,” Burns shouted. “You gonna see me. I’m gonna beat you up.”