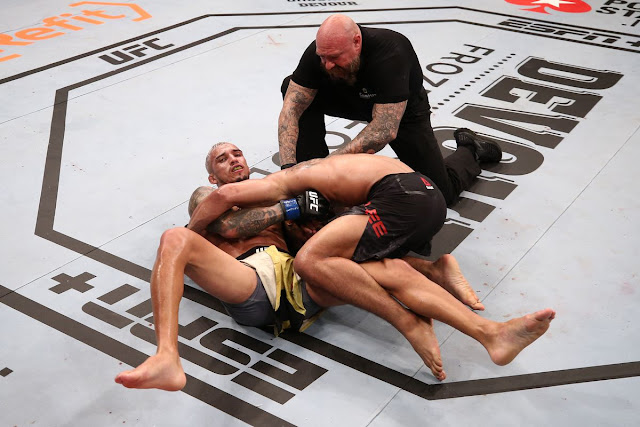 Charles Oliveira picked up probably the biggest win of his career with a submission victory over Interim title challenger Kevin Lee in the main event of UFC on ESPN+28 at an empty Ginasio Nilson Nelson in Brasilia, Brazil, due to the COVID 19 worldwide epidemic.

Charles Oliveira, who has always been full of talent but never really had that big stage to showcase them, finished off Lee with a Guillotine Chole, 29 seconds into the third round of their bout which was contested at a catch weight of 158.5 pounds.

Oliveira’s finish over Lee mean, he has now won his last seven bouts via finishes and now ties Donald Cerone‘s record of 16 finishes under the UFC banner.

Kevin Lee does his thing using majorly his wrestling so it wasn’t surprising when he went for the first takedown but Oliveira capitalised, immediately going in for Leg Locks and Heel Locks. However Lee’s wrestling is so good, he finds it easy to escape such attempts.

The second round was more of the same as after Lee showed off his improved stand up game ,he went for a take down which again ended up getting him lost in a big web of submission attempts but he was still able to maneuver into safety.

The second round ended in a better fashion for Lee, who landed his best offensive attack of the fight after taking top position and landing blows and elbows before the time ran out. In the third round, Lee as usual went in for another take down but this time it ended with him getting caught with that guillotine and the choke spelled the ended even as early into the round as possible.

Kevin Lee, who lost via the submission protested the stoppage saying he didn’t tap but the replays showed clearly he did it numerous times before the fight was officially stopped.

[…] due to the Corona Virus Pandemic that affected the whole of 2020. He was last seen in action in March 2020, when Lee tapped to now reigning UFC lightweight champion Charles Oliviera. The latter went on to defeat former Bellator champion Michael Chandler to win the Vacant UFC […]