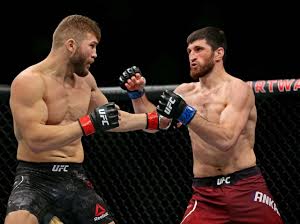 Travel Bans caused by the COVID 19 – Corona Virus Pandemic will definitely affect the logistics of UFC 249 one way or the other and this even on the first day is already causing an impact in the life’s of fighters preparing for the event.

Russian Light Heavyweight Magomed Ankalaev and Ion Cutelaba are scheduled to meet in a rematch at UFC 249 but this has been thrown into probable waters by the Bans.

Due to the travel Ban, Ankalaev who resides in Russia will find it difficult moving himself and his equipments to the UFC 249 venue. As of Monday, If you are not a Government Executive, Diplomats or Delegate, you won’t be allowed to cross the government border.
Subscribe To Live Updates
On Your Favorites Sports

UFC Lightweight Champion Khabib Nurmagomedov, who is expected to defend his title against Tony Ferguson in the main event of UFC 249 has reportedly left the country after returning home immediately a stay at home order was enforced in San Jose, California. Ankalaev will have difficulty moving to the venue and that he explained in an Instagram post.

How I will fly to this battle will be a big mystery for us, since from today for an indefinite period air flights from Russia to other countries are FORBIDDEN!
Khabib (Nurmagomedov) and the rest of his team managed to leave Russia yesterday, I should have done the same and left the country yesterday.
I think that 60% of the fight at the UFC 249 tournament will not take place!

With a venue yet to be announced for UFC 249, there will also be an issue of where the light heavyweight should go, if he manages to leave Russia. Dana White has told the media, he has a handful of locations for the event but hasn’t even made public if it is in a US or International venue.

Dana White, without mincing words told the media, fights will definitely fall out if the card due to the Travel Bans placed due to the Corona Virus pandemic but has promised to save the fight card.

Ankalaev knocked out Cutelaba controversially in the first round of their UFC on ESPN+ 28 and both were given an immediate rematch but this is now thrown into probability and could be shifted to the future.