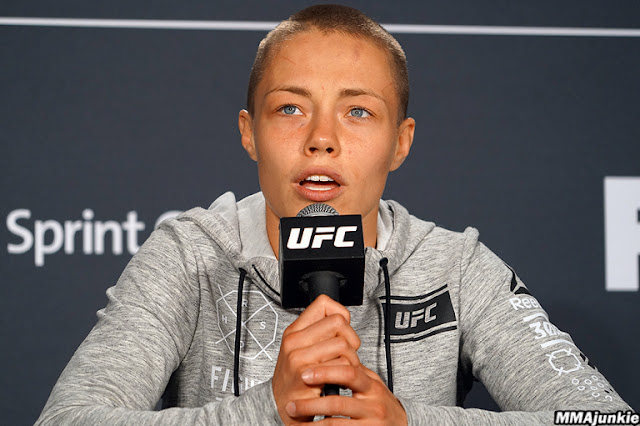 Former strawweight titlist Rose Namajunas should have been the one challenging for the title this weekend against the New Champion Weili Zhang in the Co-Main Event of UFC 248 at the T-Mobile Arena.

Namajunas (8-4 MMA, 6-3 UFC) was speaking on “UFC Unfiltered” podcast, when she revealed why she turned down the offer to face Weili Zhang for the 115 pound title.

Rose Namajunas was giving out a wonderful performance against Jessica Andrade, when her head got slammed on the canvas, ending the fight abruptly and thereby losing her title but knock out.

If she had accepted UFC offer to face Weili Zhang for the strawweight title, she would be joining Jose Aldo and Yoel Romero as fighters getting their title shots on the back of a loss, which has ignited a kind of controversy or debate about the UFC rankings. However, She had her personal reasons for turning down the offer.

“I think everyone else felt the same way, too,” Namajunas said. “I was even offered Weili at the time, but I just – at the time I was still dealing with a lot of my own (things), just getting my head right, and I hired a mental coach that’s helping me do a lot of different things. And so there was a lot of work that needed to be done.
“I wasn’t ready for that just yet. I didn’t even really know if I wanted to fight at that time anymore, just because I wanted to make sure that this is something that I wanted to do and I wasn’t just like, ‘Let’s have another fight just because I’m good at it.’”

The loss to Andrade seemed a little too much for Namajunas, whose head was seriously slammed on the canvas but after sometime to reflect on her career has reactivated her passion for the sport and she will now be preparing for a rematch with Jessica Andrade at UFC 249.

“It was definitely one of my harder losses that I’ve dealt with,” Namajunas said. “I think the thing is, I knew exactly – it was easier in the sense that I knew exactly all of the things that I did wrong. The harder part is taking responsibility for myself, and yeah, maybe situations around me that I couldn’t control could have been better. But I could have taken control over a lot more things in my life. So ultimately, taking that responsibility is the hardest part out of everything.”

“I got dropped on my head – I could have been paralyzed. It’s like, ‘Well, I wasn’t paralyzed, so why should I be paralyzed in fear if it didn’t happen?’” Namajunas said. “I should celebrate the fact that I’m walking around and it’s a miracle that my neck feels better than it’s ever felt in the past few years. Prior to that happening, I had a fracture in my neck, so it was hurting a lot – and after that, I feel great.”

[…] Namajunas made a quick work of the then reigning champion Weili Zhang, dropping her with a head kick and finishing her with strikes at UFC 261 in April to be come two […]