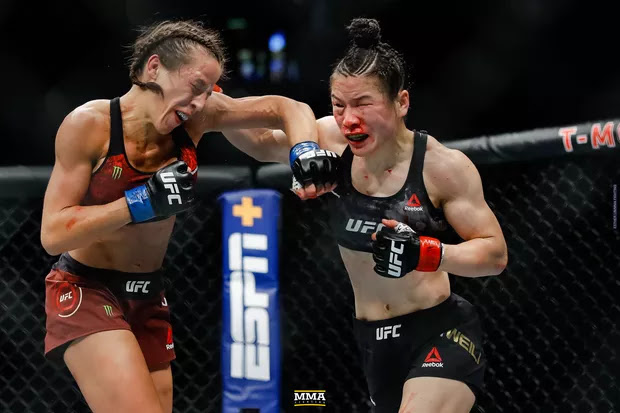 Zhang defeated Joanna Jedrzejczyk via split decision after a five round bloody battle. Both went toe to toe, exchanging punch by punch and even shared tears in a battle that could as well go down as one of the beat fights in UFC’s History. However, The first ever UFC Chinese Champion was given the nod on the Judges scorecards. Two judges gave Zhang 48-47, while one gave Jedrzejczyk the same score.

The fight was a collision of Power and tactical precision as Joanna Jedrzejczyk made use of some well defined Kick Boxing, using distance and utilised speed while, Weili Zhang went with counter Power punching, throwing huge punches that looked as potential knockout blows.

The early rounds of the fight was mostly based on Zhang’s ability to absorb Jedrzejczyk’s shots then counter with a huge power shot but still Jedrzejczyk was having the edge and connected some well timed combinations including a kick that twisted Zhang’s head.

Jedrzejczyk constantly came forward connecting two or three shot combinations that by the third round the champion was beginning to slow down. Zhang still had the power behind her punches but her output as compared to the opening rounds was slowing down.

Both fighters have everything to the fight with Jedrzejczyk going constantly out with huge volumes of shots while Zhang gave all her power out to the punch to see who’s chin will end up surviving and by late in the fifth round, Zhang kept going with her hunt for a knockout, while Jedrzejczyk was the final one to connect a spinning fist before the final Horn was heard.

After the fight, the crowd, who lived on the edge of their seats throughout the fight, couldn’t help but award them both with a standing ovation for the wonderful performance. Speaking after the fight, Zhang was quick to remember her country, who still surfer in the hands of the deadly Corona Virus.

Joanna Jedrzejczyk who came up shortbones again in her attempt to win the strawweight gold had nothing but praises for the champion and also thanked her for putting on a big show.

“She did great,” Jedrzejcyzk said about Zhang’s victory. “Congrats champ. I’m very happy that we gave you a good fight. We both put on a hell of a performance.”