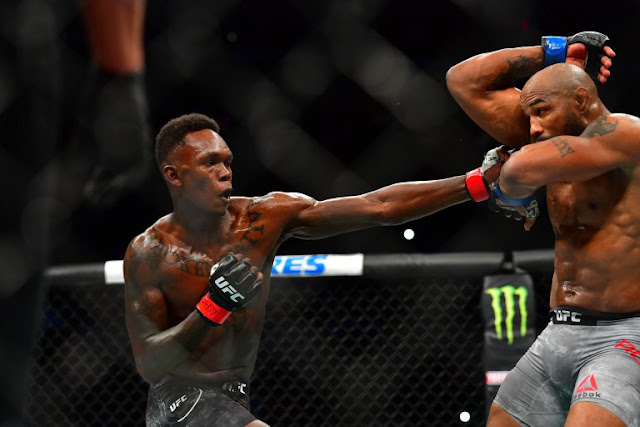 UFC middleweight champion Israel Adesanya retains his belt and unbeaten record with a unanimous decision victory over top contender Yoel Romero in the main event of UFC 248 at the T-Mobile Arena.

The middleweight title fight will definitely not be included in the UFC all time great fights with both fighters being reluctant to engage in the fight but the champion was only able to retain the title with his kicks a major factor in earning the decision over five rounds.

The fight was scored 48-47, 48-47 and 49-46 for Isreal Adesanya and speaking after the fight the champion was only happy he was able to do what he had to do.

The fight was slow due to the fact that Romero’s knockout power had the champion very cautious and very reluctant to engage and decided to pick out the contender from a distance. Romero was the only one to land a significant shot through out the fight.

Romero looked like a time bomb waiting to explode and when he finally did with a barrage of punches with hopes of trapping the champion to the cage but was unsuccessful due to the caution exercise by the Champion.

The fight still continued at a slow pace but Adesanya was able to land a few good kicks on Romero’s body including one to the head. Adesanya kept finding an opening while the Romero kept going forward and posturing before him. However, soon the kicks began having an effect on Romero, causing a huge welt on his thigh.

Adesanya kept targeting the leg to increase the damage while Romero kept coming forward and more aggressively in the final two minutes of the fight with hopes of catching the champion with time running out on him. However, none was able to get a stoppage till the final horn.

Despite the poor performance, Adesanya will still have a win in his record over Romero and with that settled went straight forward to the No.1 challenger Paulo Costa and delivered a warning ahead of their possible showdown.

“This guy’s going to actually come forward and try to f*ck with me,” Adesanya said when addressing Costa. “I’m going to f*ck this motherf*cker up. I’ll see you soon, boy.”

Romero , who is now 1 – 4 in his last four outings was totally unhappy with the fight played out and with that, falls short of claiming a world title in his second attempt.

[…] Romero (13-5 MMA, 0-0 BMMA) will be competing for the first time since his UFC dismissal in December, which followed seven years of competing at the top of the UFC middleweight division. His last bout was a unanimous decision loss in the hands of current UFC middleweight champion Israel Adesanya. […]

[…] Adesanya retain the UFC middleweight title with a unanimous decision over Yoel Romero and will now turn his focus to Costa, who is definitely next in line. Costa will love the fight to happen during international fight week in July and Dana White sees it as a very good possibility. […]

[…] connected a few big punches that forced a reaction out of the spectators which looked more like the fight against Isreal Adesanya at UFC 248. However, Romero made very little movements and made himself and easy target for […]