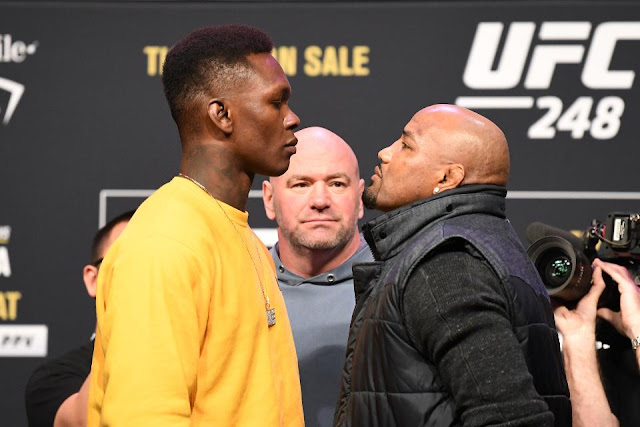 ↑ Grab this Headline Animator
UFC middleweight champion Isreal Adesanya (18-0 MMA, 7-0 UFC)  will put his unbeaten record and title on the line against tested Veteran Yoel Romero (13-4 MMA, 9-3 UFC) in the main event of UFC 248, this coming Saturday at the T-Mobile Arena.

Adesanya, who is 12 years younger than the 42 year old Romero has all the physical advantages heading into the first defence of the middleweight title , since defeating Robert Whittaker in October to win the belt.

Adesanya heads into the fight on the back of the biggest win in his professional career as compared to Romero, who has lost his last three fights, with two of those losses coming against the “Style Bender”s last victim Robert Whittaker.

Romero is no doubt the boogeyman of the middleweight division and will definitely be choosen by some due to his huge KO power but there need to be considerations as Romero has been at the losing side in the last four years. To cap things up, Adesanya has huge techniques and approaches that work real fine with his finishing abilities. Striking, Defence, and athletism supersedes Romero’s, who absorbed a total of 192 combined significant strikes and 106 of those were to the head in his fight against Robert Whittaker.

Yoel Romero is mostly patient and seeks out an opportunity to land a big KO but Adesanya will have a reach advantage that will make difficult connecting his strikes. Adesanya is a counter puncher and will have to be up on his toes to avoid being knocked spark out by Romero. Joanna Jedrzejczyk