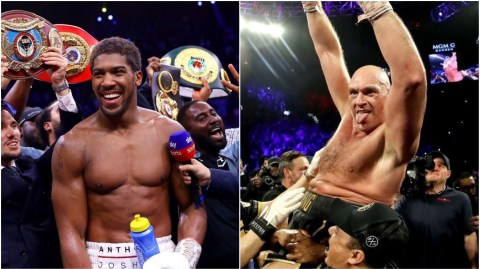 Tyson Fury’s promoter Frank Warren doesn’t seem unified Heavyweight Champion Anthony Joshua getting in the ring for a unification fight with his fellow Brit until 2021.

Before the Pandemic, expert projected the two heavyweight titlist will unify the titles in December but this won’t be happening as the Corona Virus pandemic has currently freezed all sporting activities.

Tyson Fury, who is just a month away from his seventh round demolition of the former unbeaten Knockout artist Deontay Wilder to win the WBC title, was ones again slated to meet in the ring for a Trilogy fight but this has been pushed back to early October due to the Corona Virus COVID 19 Pandemic.

Anthony Joshua is still slated to defend his IBF, IBO WBA WBO heavyweight titles against mandatory challenger Kubrat Pulev on June 20 but that date doesn’t look feasible anymore and could be pushed back to a later date as Fury – Wilder Trilogy has been pushed to early October.

“That will push [a fight with Joshua] back to some time in February if that is the case,” Warren said to The Mirror.
“They’ve locked down Vegas and the commission has said no boxing. We need the time to do the Wilder fight justice in terms of promotion, it won’t go on till the autumn. The problem you have is also the training camps if they can’t do them properly, they can’t get in sparring partners from around the world.
“Fighters also need a date to be fully focused on. They want to be at their peak for a date so they need a date to train towards, we can’t give them any dates. It is a blow as we would have liked to have got it done in the summer but it is what it is. The whole country is in the same boat, everything has gone on hold.”

Both fighters will have to deal with their primary responsibility before a unification fight with all the heavyweight world titles at stake on February 2021.