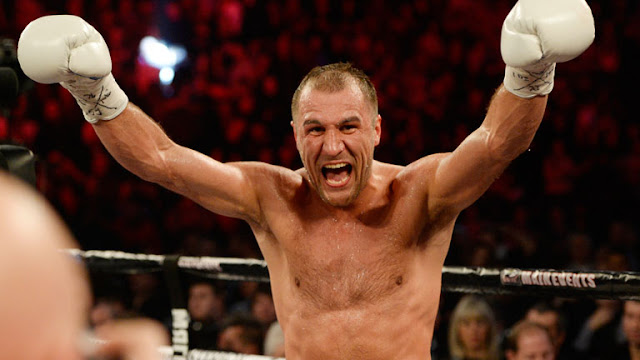 Former heavyweight champion Sergey Kovalev will be making his ring return against former title challenger Sullivan Barrera (22-3, 14 KOs) in a twelve round cruiserweight battle on a card that features that feature four fighters from around the world battling for a titles from the four major sanctioning bodies on Saturday 25th April at the Fantasy Springs Resort Casino,Live on DAZN.

The Russian will be making his return to the ring since losing to Boxing Biggest Star Canelo Alvarez in his outing last year. Kovalev has been at the top level since knocking out Nathan Cleverly in 2013 to win the WBO light heavyweight world title and unified the title with the IBF and WBA belts with a win over Hall of Famer Bernard Hopkins. As a unified champion, Kovalev defeated Jean Pascal and Isaac Chilemba in his first and second defences before his set backs against Andre Ward.

“I am happy to get back in the ring and to be on my way back to world championship bouts,” said Sergey Kovalev. “Barrera is a Cuban fighter and, even though I never faced any Cuban fighters as a professional, back in amateur days it was always Russian boxers competing with Cuban boxers, so I’m looking forward to remembering my amateur boxing. I’m very glad to be back and to bring my boxing to my fans on April 25.”

Barrera, who owns a spectacular amateur career, has over the years grown gradually into the top ranks starting with his 2011 campaign, when in just two years as a professional won two regional titles with a win over Frank Paines and followed that up with a wins over Jeff “Left Hook” Lacy and Karo Murat. The 38 years old , had his first loss against Andre Ward but bounced back from that with a win over Vyacheslav Shabranskyy, taking away his undefeated record. His only other losses have being against Jesse Hart and Dmitry Bivol.

“This will be the most important fight of my career because I have always pursued a fight with Sergey Kovalev,” said Sullivan Barrera. “I know that he has to win this fight in order to continue with his career, but the case is the same with me. It is very important to win this fight, which for me would be like becoming a world champion. That’s what it means for me to finally face Kovalev. I also want to thank Golden Boy for believing in me and my team, and for giving us the opportunity that we have always wanted, which is to fight Kovalev.”

Patrick Teixeira (31-1, 22 KOs) will be defending his WBO super junior middleweight title against Undefeated Argentine Brian Castano in the Co main event Castaño (16-0-1, 12 KOs) in a 12 round battle.

“I am very happy and excited to defend my world title for the very first time,” said Patrick Teixeira. “I worked very hard to become a world champion, and I won’t let anyone take that away from me. I know that Castaño, as my mandatory challenger, is tough and experienced, but my team and I are more than ready to go to war and deliver a great performance for all the fans at Fantasy Springs.

Rene Alvarado (32-8, 21 KOs) will also be defending his WBA super featherweight title against Roger Gutierrez (24-3-1, 20 KOs) since blasting out Andrew Cancio to win the belt. Gutierrez is running on a five fight winning streak that also includes his upset win over Eduardo Hernandez.

Wanheng Menayothin (54-0, 18 KOs) will also be defending his WBC minimumweight title against Philipino Marco J. Rementizo (12-3, 9 KOs) in a 12 round battle.

Other Fights on the card includes