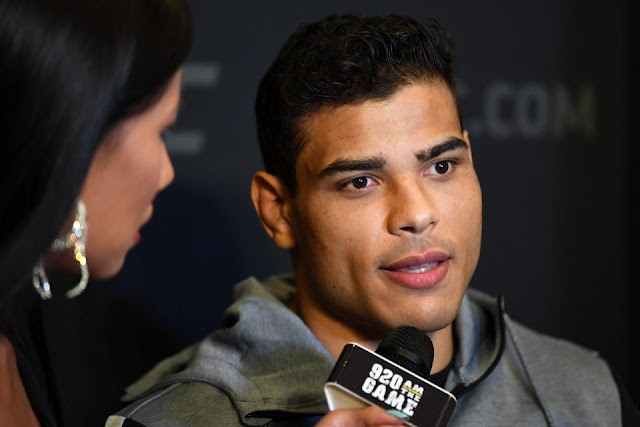 UFC middleweight contender Paulo Costa wasn’t happy with what he saw in Israel Adesanya‘s defence against Yoel Romero and aired out his displeasure and called the Champion “Shameful” and promised to unseat him when they eventually meet later this year.

Paulo Costa was supposed to face “Style Bender” for the UFC middleweight title at UFC 248 main event but pulled out due to an injury, leaving Yoel Romero a chance to compete for the title despite coming off three consecutive loses.

Following the event, which turned out to be a Lalucster fight with the champion cruising through to a unanimous decision win. Paulo Costa showed up at the post fight press conference to express the disgust in what he witness during the fight.

“Horrible fight,” Costa told reporters, including MMA Junkie. “I was ashamed to watch that fight. Adesanya is nothing. Adesanya is the most shameful champion I have ever seen. He just runs. He’s nothing. He’s scared. I think he don’t deserve to talk about him, but he was (expletive). That fight was (expletive).”

The blame for the way the fight played out was taken differently by costa, who believed that the Romero did enough to win the fight by being the aggressor throughout the five available rounds while UFC President Dana White blamed Romero for not being aggressive enough to force the champion into a brawl.

Adesanya retain the UFC middleweight title with a unanimous decision over Yoel Romero and will now turn his focus to Costa, who is definitely next in line. Costa will love the fight to happen during international fight week in July and Dana White sees it as a very good possibility.

Ahead of their possible meeting , Costa has promised he won’t be letting the champion allow the fight unfold the way the UFC 248 main event unfolded.

“I will make him cry,” Costa said. “I will hit him very badly, and he will cry like a baby. I will slap his face in my fight against him. That’s it. He’s shameful.”