Oleksandr Usyk Vs Derek Chisora Gets Hit By COVID 19 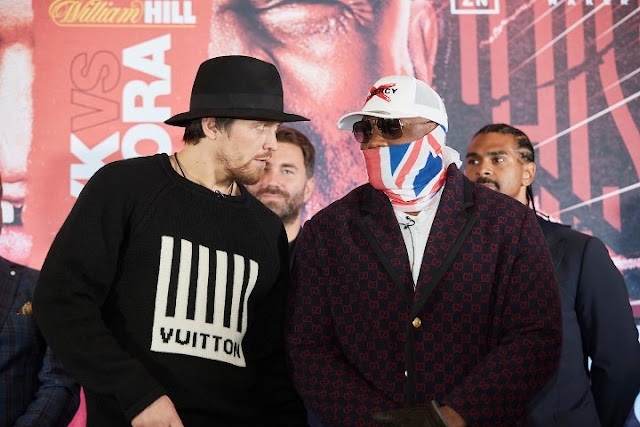 Due to the recent outbreak of COVID 19, almost all the Boxing Events in February have been cancelled as and some postponed and assigned future dates but for Oleksandr Usyk Vs Derek Chisora, things will be taking the only other route, which is fighting behind closed doors.

However the Brit, who takes on the former Undisputed Cruiserweight champion believes that COVID 19 was created as a weapon to wipe out humans in large quantities and with that give room for a restart. However true this is, it also corresponds to the recent conspiracy theories about how the virus “COVID 19” came into existence.

“For him to take this risk, I don’t know but it’s going to be a good fight. I’m excited,” said Chisora to IFL TV. “Oleksandr is going to come to fight or box. It’s going to be one or the other, who knows? One thing I know is we’re going to train to our ability to overcome whatever hell we go through. So it’s going to be amazing.
“No, Coronavirus never affects me. Listen, it’s a sadness that is killing people,” said Chisora in giving his theory on how the coronavirus originated. “With all these resources we have and all these billions we have, people are dying.
“But at the same time, it’s GENOCIDE. You put something out there that can kill everyone and half of this population so we can rebuild. People complain about climate change. I think the most destroyers in the world are human beings, and maybe we can clear some of these human beings around. It’s OK. I think it’s been put out, come on, man. It’s been put out,” said Chisora.

Theories have emerge stating that the virus was created as a bio-weapon and released into the public to reduce the population of the masses and while another theory says the Virus was been studied in the Laboratory but escaped due to poor security measures. However this are still without substantial prove to be taken seriously.
Subscribe To Live Updates
On Your Favorites Sports

However way the fight will be staged, Chisora will be gunning for a knockout when he takes on Usyk and that seems the only way he can score a victory as he doesn’t possess the boxing skills to win the fight by decision but that could still be considered, if he gets to drop Usyk three of four times during the fight.

“That’s what the issue. You get southpaw and let’s rock and rock,” said Chisora. “I believe it’s going to be a good fight. I’m looking for a knockout.”

Coming out with a win will seem hard for Chisora sue to the calibre of opponent he is preparing to face, however Usyk has never faced a heavyweight as talented and a Heavy puncher as Chisora. This makes it a fight with any possibility. Usyk has only faced Chazz Witherspoon with is no experience as compared to Chisora who has fought all his life at heavyweight.