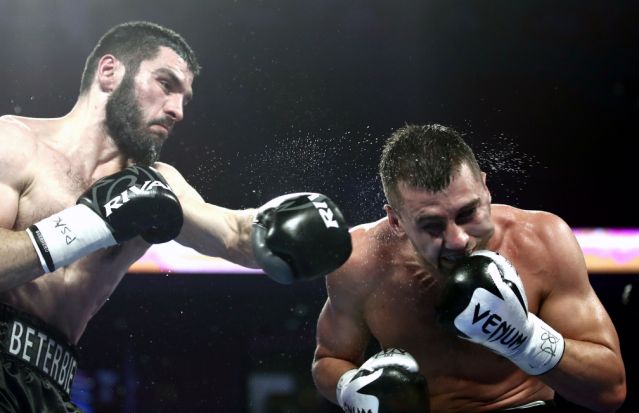 Chinese light heavyweight Meng FanLong had first hand experience watching Artur Beterbiev demolish Oleksandr Gvozdyk and believes while doing that, he noticed flaws in the Russian’s game and will be looking to explore those flaws when they eventually meet after the Corona Virus Pandemic.

FanLong watched from ringside as Beterbiev (15-0, 15 KOs) drilled Ukraine’s Gvozdyk (17-1, 14 KOs) , dropping him thrice in the tenth round before the stoppage in their IBF/WBC light heavyweight title unification.

“I was at that fight and I saw his whole performance,” Fanlong told BoxingScene.com through a translator. “I saw his strengths and I also saw his weaknesses, which greatly helped me in this training camp.”

FanLong was supposed to face Beterbiev this Saturday at the Videotron Center and had almost completed his training camp in Paterson,NJ ,before the fight got shifted forward due to the Corona Virus Pandemic.
Subscribe To Live Updates
On Your Favorites Sports

Fanlong (16-0, 10 KOs) will definitely be underestimated when facing an opponent, who has knocked out all of his opponents but this according to Chinese light heavyweight is a motivation, pointing fingers at his accomplishments as an amateur.

“People are underestimating me because a lot of people make comments without really looking at things,” Fanlong said. “If they look at my videos, they’ll know who I was as an amateur and they’ll know what I accomplished. The more people underestimate me, the more power it brings to me, that I have to prove myself.”

FanLong, who represented China at the 2012 Olympics, will be taking a step up in class when he faces Beterbiev , who also competing in the same event lost to the Gold medalist Oleksandr Usyk in the Heavyweight category.