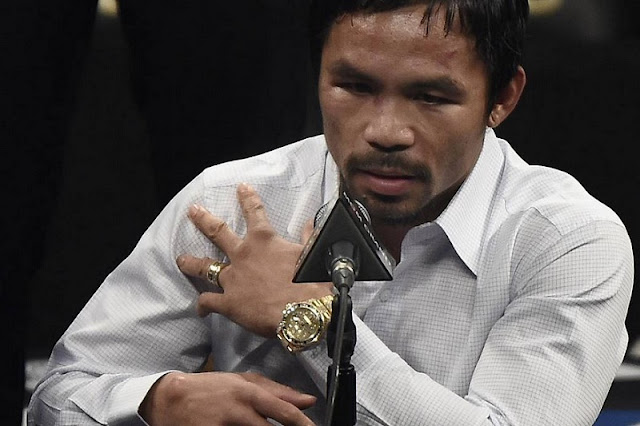 Eight division champion Manny Pacquiao wants an investigation carried out on a leaked letter which was sent to him, informing him he needs to quarantine himself following his exposure to a colleague, senator Aquilino “Koko” Pimentel III, who has now tested positive to the Corona virus.

Manny Pacquiao, who is also a serving Senator hosted a dinner for the political party PDP-Laban on March 4th, which was also attended by Pimentel and a footage of that gathering was the reference to which the assumption that he might also be exposed to COVID 19 virus.
The Letter from the Dasmarinas Village was leaked all over social media.

“For your own family and household’s safety, please have yourself self-quarantined, STAY HOME. No one including any of your household can come out,” the letter from village chief Rossana Hwang read, saying the measure was recommended by the Makati Health Department and a doctor from the Makati Medical Center.

The village chief Hwang also made clear essential items could be purchased for the Pacquiao family and pleaded with the Senator to be a good example, following the guidelines placed to help reduce the spread of the virus.
Subscribe To Live Updates
On Your Favorites Sports

This made the WBA super welterweight champion angry and he fired back with a letter of his own, Calling out Hwang saying “has been [the] subject of several news reports and malicious social media posts,” The Philippine Daily Inquirer reports.

He also wished to know why a letter directed to him got leaked all over social media without his consent and made clear, he was going to ignite an investigation on the matter.

“In this regard, I wish to know how this private letter addressed to me went around social media with total disregard for my right to privacy. Meantime, I will refer this matter to the appropriate agency for proper investigation to avoid the same incident from happening,” Pacquiao wrote.
“Let me also emphasize that it was not ‘partying’ as stated in your letter. It was a political meeting. The word ‘partying’ casts me as someone insensitive to the current crisis of the nation,” Pacquiao added, referring to the dinner for PDP-Laban members, Rappler reports.

Pacquiao who said, he doesn’t mind dying while lending a helping hand to those suffering due to the deadly virus added that the dinner which took place on March 4th, happened days before Pimentel made public, he had the symptoms.

He also added that before the Village letters, he and his immediate family had already gone on Self Distancing measures and are currently carrying out a self quarantine starting from the 24th of March.