Skip to content
HomeSports NewsKhabib Nurmagomedov On Tony Ferguson – He Is A Stupid Guy, Don’t Understand Him

Khabib Nurmagomedov On Tony Ferguson – He Is A Stupid Guy, Don’t Understand Him 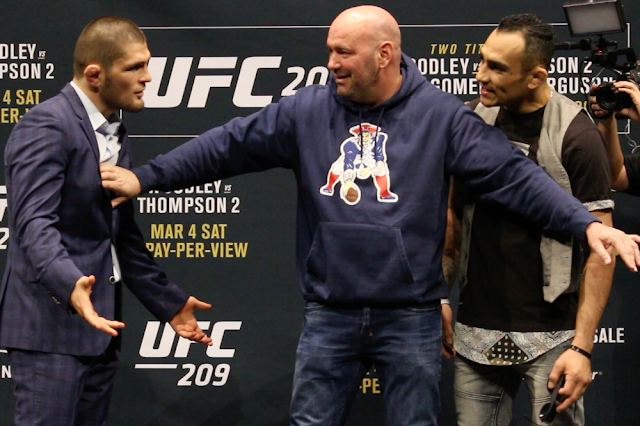 UFC Lightweight champion Khabib Nurmagomedov and the Former interim champion Tony Ferguson have been slated to meet more than ones in the past but have been cancelled due to one reason or the other. However, it seems clear that there seem to be some bad blood between the two, which was evident in their press conference ahead of their UFC 249 Pre fight press conference.

Both fighters shared the stage together with the aim of answering questions ahead of their upcoming UFC 249 meeting on Friday but it all turned out a shouting and yelling competition between the two.

Having always been outspoken about his view of the unbeaten Champion, Ferguson wasted no time in ripping into Khabib Nurmagomedov as this wasn’t going to get any different.

“You like beating on high school wrestlers? That are preparing for state the week before?” Ferguson shouted while referencing a recent training session where Nurmagomedov was grappling with a California state wrestling champion.
“And you like making homeless do pushups in New York and making fun of them. I owe you two to the stomach and you owe me 20 pushups but I will do the pushups with you after you lose.”

Nurmagomedov on his part acknowledged that facing Ferguson was another tough challenge entirely and might even be difficult to finish him off as compared to other opponents but says Ferguson has only been “Stupid” that’s why people don’t like him.

He also made clear he enjoys every bit of what he does in the Octagon and since he truly deserves his shot at the title, he will will see what really plays out on April 18.

“I think we have to fight,” Nurmagomedov said. “I think he deserves this. He is a real challenge. I respect his skills. Like fighter, he’s a very good fighter but why people don’t like him? Because he’s a stupid guy. That’s why. Nobody understands him. Honestly he looks stupid. That’s why nobody likes him.
“When you go to the cage you cannot take too serious, like personal with opponents. Because you have to relax, you have to focus, you have to follow your game plan. When I go to the cage, I enjoy with my opponents. I enjoy when I make them tired, when I make them tap. With Tony, it’s going to be more tough than my other opponents but who knows. We’ll see. April 18 is going to be a very big night for lightweight division history. Who wins this fight is going to be greatest lightweight ever and I believe in myself, I believe in my skills.”

Nurmagomedov also sent a jibe at Ferguson in the form of mutual respect saying he respects his challenger but due to too many cancellation he will now be facing late in his fighting career. Ferguson didn’t take that lightly and continued bad moughting the champ.

“Watch when you get your ass kicked by an old man,” Ferguson said. “I just got old man strength. Champ sh*t only motherf*cker, I can’t understand you, you son of a b*tch.
“I’m going to hit you so hard in your stomach, you’re going to piss f*cking blood.”

Khabib maintained his position that Ferguson was a stupid person and that he doesn’t seem to have an understanding of him but still respects him as a fighter.