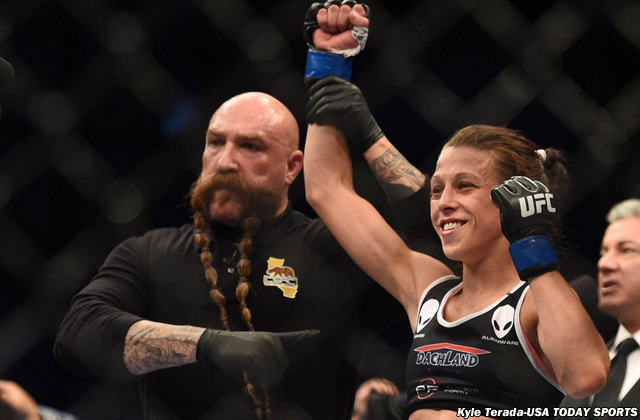 Joanna Jedrzejczyk, who was ones one of the most dominant champions of the UFC roster has in recent months being on the losing side  and definitely knows what it is to be a Champion and a challenger. However, Jedrzejczyk absolutely knows the side he prefers.

Jedrzejczyk, who made five defences of the UFC strawweight title in a span of two years, saw her title reign end with a stunning upset in the hands of Rose Namajunas at UFC 217. Since her loss to Namajunas, Jedrzejczyk has been a challenger and has fought for both the Strawweight title and has come up short in those title shots.

The 32 year old Jedrzejczyk, wil Yuell be taking another shot at the UFC strawweight title when she faces Weili Zhang in the Co-Main Event of UFC 248 and despite being such a dominant champion during her reign, she has shown no sign of pride and shame in admitting that she only has Hunger to become a two time Champ.

“Since I lost the belt, I became even more obsessed than when I was champion,” Jedrzejczyk told MMA Fighting. “With the belt, physically having the belt or not, you can act like the champ. You can be the champ. I made it to the elite. Not once but six times. I miss it.”

Despite losing her title in such an unexpected fight and having to build back her desire to become a title, Jedrzejczyk hasn’t forgotten the records she has broken during her title reign.

“I’m looking forward,” Jedrzejcyzk said. “It’s going to be my 14th UFC fight and 10th UFC fight for the belt . It means a lot. It’s big. There’s not so many people with a legacy like this, with so many experiences. I keep it fresh because I want to fight for my dreams.”

Going for the title ones again , Jedrzejczyk will fight with one of her relatively unknown opponents since she joined the UFC. Zhang will be facing her third top 10 ranked opponent ranked despite defeating Jessica Andrade to win the belt.

Jedrzejczyk believes that Zhang has got a very good record and did very well to take out Andrade when the very rear opportunity landed in her arms . However, the Polish fighter doesn’t believe that Andrade, who she ones faced was in her best of shapes heading into the fight against Andrade

“Her ranking, her record is so good, 20-1, but records and rankings don’t fight,” Jedrzejczyk said. “She’s the champion. She’s right at the top and she’s the best strawweight in the world right now. She’s my next big challenge and I’m very happy to face the best. She’s very dangerous. She surprised the world. She did well in the fight with Jessica Andrade.

“I think that Jessica Andrade was not in her best shape when she faced Weili Zhang. What I heard from her camp, that they had so many problems in China with the weight cut. She couldn’t be focused on the proper weight cut and rehydration and then fight. It was a totally different Jessica Andrade in the fight with Weili Zhang. Like I said, she’s the champ. She’s training really, really hard. But she hasn’t faced someone like me yet.”