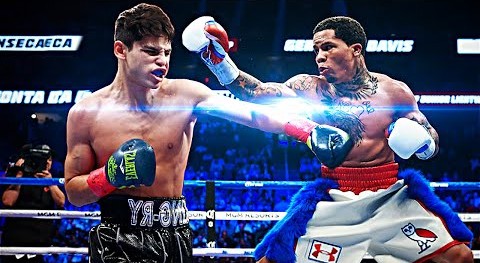 Undefeated light weight prospect Ryan Garcia and WBA lightweight champion Gervonta Davis got involved in a series of exchanges on twitter as both seem to be on a collision course, possibly going to happen in future.

The WBA Champion dismissively replied to a tweet and taunts from the propect concerning their fight happening sooner than later and his comparisons were mind blowing.

“You [got a] better chance at beating the Coronavirus than beating me,” Davis stated in a Tweet to Garcia. “[But] whatever, Christopher Reeve!”

The conversation seem to get towards the ring direction after Davis referred to Garcia as a “lil Man” in one of his tweets and Garcia tried tricking him into an insulating competition by mocking Davis, who is only 5 feet,5½ Inches tall.

“I know you aren’t calling anyone little man,” Garcia responded. “I want my shot at your fake ass title, I want to prove to the world I’m the real champ.”

Garcia (20-0, 17 KOs) clearly wants a shot at Davis (23-0, 22 KOs) WBA lightweight world title, which he won with a twelve round knockout victory over Yuriorkis Gamboa (30-3, 18 KOs) in his last outing at the State Farm Arena and is expected to make his first defence against Leo Santa Cruz (37-1-1, 19 KOs) in his next fight possibly in the summer.

Garcia has had a quick move up the lightweight rankings and in his last fight blasted out Fransisco Fonseca with one punch in the opening round of his last fight back in February at the Honda Centre in Anaheim, California.
That was the second straight quick knockout victory for Garcia, who blasted out Romero Duno (22-2, 17 KOs) in the first round of their fight in November 2nd at the MGM Grand Arena in Las Vegas.
Ryan Garcia will most likely face former WBC and WBA champion Jorge Linares (48-5, 30 KOs) the fight is likely to possibly happen during the summer at the Staples Centre but is still subject to changes due to delays by the recent Corona Virus epidemic.