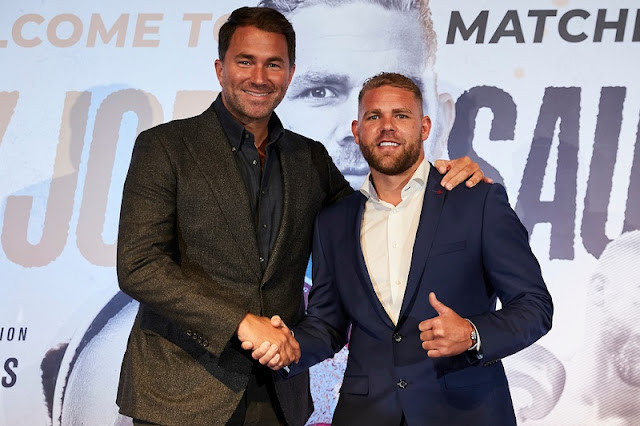 It’s no new news that Billy Joe Saunders  has gotten shelf into another trouble after posting a video on social media, educating people on how to hit their female partners during the Corona virus lockdown.

The WBO super middleweight champion can’t seem to get himself without causing problems as he was few weeks ago forced to apologize for his actions, stopping his friend, Trainer and Colleague from boarding a Plane from America due to a prank.

“I just wanted to make a little video for all you dads, husbands, if you’ve got girlfriends,” Saunders said to the camera in the footage which was leaked on WhatsApp. “Obviously this COVID-19 is getting very serious and we are isolated away in tight spaces.
“If your old woman is giving you mouth and you try to be patient, you try to be calm, cool, but after the sixth day, you’re just about to explode. All of a sudden she’s coming at you, spitting a bit of venom in your face, ready to say something, you may have left the dishes out, I don’t know what you’ve done but you’ve upset her.”

Saunders was preparing for a mega fight with Boxing Pound For Pound Star and three division champion Canelo Alvarez  at the T-Mobile Arena on May 2nd, before the Corona virus outbreak, which force the fight backwards into uncertainty.

“As she comes in, she’s coming at you and you’ve lost it, just keep it safe with the hands. So as she comes in, she’s just about to say something, all of a sudden you explode and hit her on the chin.
“At this time she may flash and see white and think: “What’s happened?’, she’s in a state of horror, she doesn’t know what’s going on and all of a sudden you dip down on that knee and you finish her off. That should do the trick.”

Despite his apology, the British Boxing Board Of Control has decided to suspend the former British, Commonwealth and European middleweight champion, pending a hearing, according to a statement released by the board on Monday.
Saunders Promoter Eddie Hearn has condemned the behaviour, calling it idiotic and appalling as it is never right to used violence against our female partners and making it worst  is the young people watching the video at home.

“I was appalled really. It was so idiotic, it was so frustrating because I know Billy well. It’s one step forward, four steps back with Billy Joe Saunders. It’s unacceptable for Joe Bloggs down the street to do it. It’s much more unacceptable for a world champion boxer to be doing it,” Hearn told Talk Sport.
“Young people are watching that video. People who are in abusive relationships are watching that video. You cannot do it, it’s unacceptable.
“And to do it at this time when the world is on his head, it’s so frustrating. It’s just an idiotic move.”