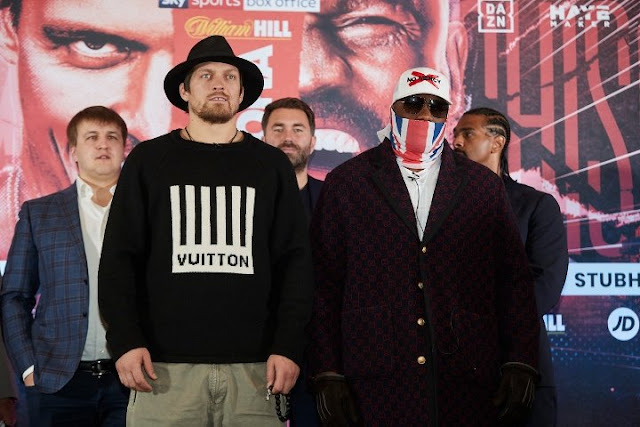 Derek Chisora’s Manager David Haye is making sure that his Heavyweight is totally focused on his upcoming fight with Former unified Cruiserweight champion Oleksandr Usyk.

The former two division champion practically knows what it means to move up in weight to win a world title and with that wouldn’t like his fighter underrating the Ukrainian, who will making his second appearance as an heavyweight.

Oleksandr Usyk made his heavyweight debut in October with a stoppage victory over Chazz Witherspoon, who took the fight on short notice and admitted he got exhusted and couldn’t continue fighting.

Derek Chisora has no doubt been tested and has been in many ring Wars, notably twice against Dillian Whyte, caused some serious issues for Robert Helenius and Vitali Klitschko and a surprising out of no where Knockout over Carlos Takam.

Usyk who is presently the WBO Mandatory to the title held by Anthony Joshua, hasn’t been given much problems in the ring and has mostly been running through his opponents. His toughest fight was against Mairis Briedis in the WBSS.

Haye will want Chisora to take the fight to Usyk, break him down gradually and stop him within the distance.

“Business is business. I’ve made sure he is not thinking about [any other fights] at all. It doesn’t matter, he has to find some way to drown Usyk. Who can drown the longest? I think Derek can, he has been drowning his whole career, gasping for oxygen, being out of shape, he is used to fighting on empty. Can Usyk fight on empty?,” Haye said.