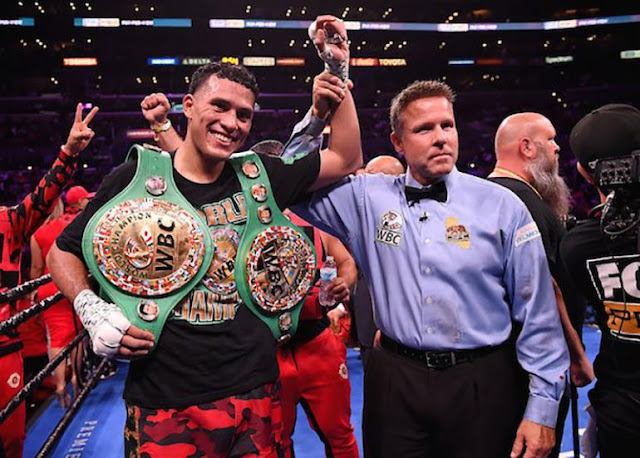 Benavidez (22-0, 19 KOs), who is just 23 years of age, stopped two time super middleweight champion Anthony Dirrell in the ninth round of their September clash, trained by his father Jose Sr., brother and former title challenger Jose Jr.. Benavidez, who previously sparred with former middleweight champion Gennedy Golovkin and Peter Quillin ,went from being a 15 year old prospect to a Knockout artist with a 10 fight winning streak between the space of 2015 and 2017. This also included his stoppage victory over Rogelio Medina, using a seven punch combination that earned him his first championship.

“I’m very excited to be fighting Angulo on SHOWTIME and in front of my hometown crowd,” said Benavidez. “I haven’t fought in Phoenix in five years. It’s exciting to be back. I expect Angulo to come in ready. I know he just pulled an upset in his last fight and he’s not taking any shortcuts, but neither am I. Angulo has never been stopped, so I want to be the first person to stop him. I feel like I’m more motivated with a hungry fighter like him in front of me, and you will see it in my performance.”

The Columbian Angulo (26-1, 22 KOs) , who fights out of Maimi, will be taking his second shot at a world title on the back of a three fight winning streak which includes two victories over formerly unbeaten fighters. Blasting out Reinaldo Gonzalez in 2018, a fight after losing a decision to the then super middleweight champion Gilberto Ramirez, then threw shelf back into title contention with a decision victory over Anthony Sims Jr.

“I’m very motivated by this great opportunity to fight for the world title again,” said Angulo. “Benavidez is a talented world champion who is clearly one of the best super middleweights in the world. This is going to be a great fight for the fans because of the style I bring to the ring. My Mexican style of fighting will be too much for Benavidez and I will have my hand raised on April 18.”