Billy Joe Saunders Has Been Suspended By The BBBofC 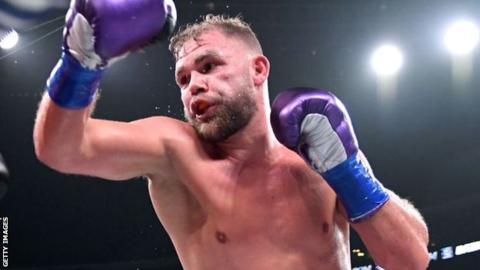 The British Boxing Board Of Control has suspended the licence of Super middleweight champion Billy Joe Saunders due to a Social media video he posted, which depicted techniques on how to hit a woman.

Saunders has in the past, given the world of boxing a bad taste but this time he claimed it was a joke and apologized for the video. Back in 2018, he posted a video that showed him offering a woman crack cocaine after she hit a passer by. He was fined £100000 by the BBBofC for dragging the sport in the mud.

In a statement, the BBBofC announced his suspension.

“The British Boxing Board of Control having considered comments made by Billy Joe Saunders on social media have suspended his boxer’s license pending a hearing under the Board’s misconduct regulation, at a time and venue to be confirmed as soon as possible,” a statement said.

Three weight world champion Claressa Shields, who was also offended by the video, posted a video of her own, teaching Women how to respond to such an attack. telling them to duck and “hit them as hard as you can in the nuts.” .

Saunders had expections of defending his WBO super middleweight title against Boxing Star Canelo Alvarez on May 2nd but the fight’s formal announcement has been held back due to the Corona Virus Pandemic.

If the BBBofC decides to give Saunders a longer suspension, the fight could be delayed or get eventually cancelled.

This is just the latest of Saunders bad behaviour, as his bad records dates back to  2008, when he got sent home early from the Olympics after a video emerged. He was seen behaving in a bad manner to a woman at a French hotel where the British team had stayed during their Training Camp.

[…] his apology, the British Boxing Board Of Control has decided to suspend the former British, Commonwealth and European…, pending a hearing, according to a statement released by the board on Monday. Saunders Promoter […]