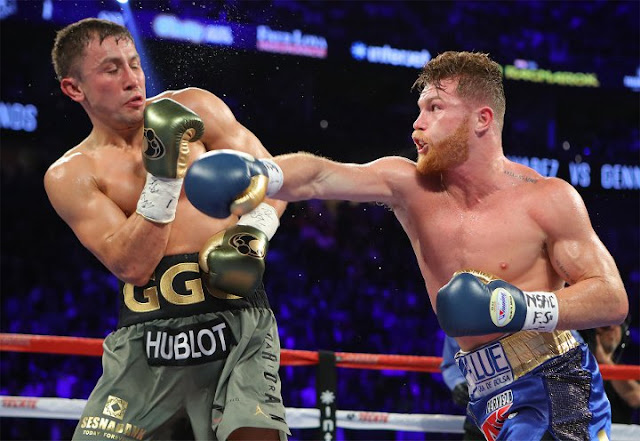 Boxing Star Canelo Alvarez has been tipped by bookmarkers to defeat Former middleweight king Gennady (GGG) Golovkin in their anticipated trilogy fight which is expected to take place in September.

The three division champion from Mexico is expected to defeat GGG squarely this time and has been favoured with odds,even much more than his last two meetings with the Kazakhstan knockout artist. Sportsbook BetOnline.ag has set Canelo at -260 to beat GGG (meaning that with a $260 bet, you win back $100 while GGG, is given 3 full odds to win the fight.

Canelo made his middleweight debut in the first fight against GGG , in which the later was tipped to win the fight but it eventually played out a 12 round controversial split draw, with many believing that GGG should have been given the nod and that made them all making him favorite for the second fight in early 2018, which was then delayed due to Canelo testing positive to the banned substances Clenbuterol.

When the fight preparation got back on track GGG was still the betting Favourite but this time ones the opening bell was heard, Canelo ground out a 12 round unanimous decision victory to win the all the titles at middleweight except the WBO title.

Canelo Alvarez has since the win been in a rise, winning world titles in three different weight classes and in three straight fights. He blasted out Rocky Fielding in three rounds to win the WBA regular Super middleweight title and then went on to climb up the light heavyweight division to knock out former long reigning title holder Sergey Kovalev in the eleventh round, thereby winning the WBO 175 pound Championship.

Ɠennady Golovkin then took a lengthy stay away from the ring before returning with a Knock Out victory over Steve Rolls then took away a Unanimous Decision victory over Sergiy Derevyanchenko to win the Vacant IBF middleweight title after it got stripped from Canelo Alvarez months after for his delay to come to agreement with the ten Mandatory Challenger Sergiy Derevyanchenko.