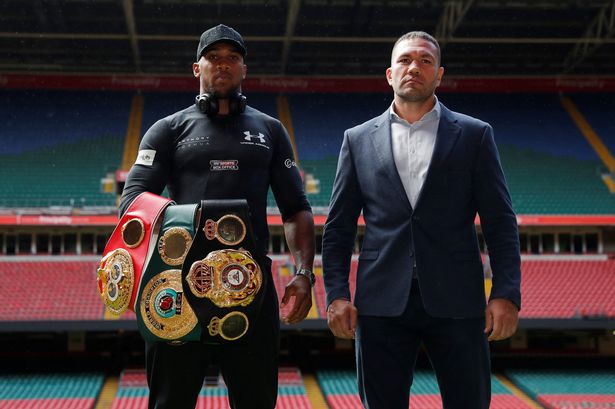 ↑ Grab this Headline Animator
IBF,IBO, WBA and WBO heavyweight champion Anthony Joshua and his Mandatory Challenger Kubrat Pulev have both promised to give a big performance ahead of their championship fight, scheduled to take place on June 20th at the Tottenham Hotspur Stadium, live on Sky Sports Box Office.

Anthony Joshua reclaimed his titles with a One sided unanimous decision win over Andy Ruiz Jr. In their rematch back in December at the Diriyah Arena in Saudi Arabia. having big hopes of a unification fight with the new WBC heavyweight champion Tyson Fury, Anthony Joshua will have to properly put away Pulev as a statement.

Pulev on the otherhand, is the IBF no.1 and the IBF mandatory, who takes a second shot at winning a world title after losing his first attempt against Wladimir Klitschko in 2014. He has since won six in a row, recently owning victories over top contender Derek Chisora and before then a win over Hugie Fury in an IBF title eliminator.

“I am happy to have the opportunity to show the world how strong I really am,” said Pulev. “Becoming a Heavyweight World Champion has always been my mission in life and on June 20 2020 I will fulfil my destiny!”

Anthony Joshua will be returning to the UK for the first time since his knockout victory for very Russia’s Alexander Povetkin at the Principality Stadium and will be hoping to defend his belts in style against Pulev on June 20 in order to set up an Undisputed fight with Tyson Fury by the end of the year.

“On June 20, I am defending my Heavyweight World Titles,” said Joshua. “I’m back in my home city after some time away. A spectacular stadium has been built in North London and I’m honoured to bring the boxing community from all over the world to witness us make history with the stadium’s first Heavyweight World Title fight. The belts go back up in the air and nothing will stop me from being victorious.”

Joshua and Pulev were initially scheduled to fight back in October 2017 but pulled out due to an injury and was replaced by Carlos Takam, who got knocked out in the 10th round of that faithful encounter.