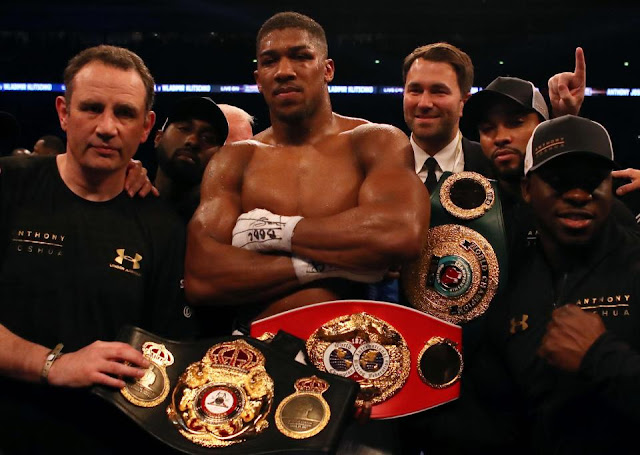 Anthony Joshua’s Promoter Eddie Hearn says the IBF, IBO ,WBA, WBO heavyweight world champion Anthony Joshua will be looking to end his upcoming Mandatory defense against IBF No. 1 Kubrat Pulev in a more spectacular fashion, when they meet on the 20th of Ju

In December, Joshua revenged his first career loss with a one sided unanimous decision over Andy Ruiz Jr. which was in another level as compared to their June 1st encounter that saw Ruiz Jr. rise from the canvas to drop Joshua four times en route to a seventh round stoppage win.

Anthony Joshua controlled the fight from the first round to the last against a Ruiz Jr., who under-trained and overweight couldn’t put together his punches over 12 rounds but there were critics who believed Joshua only boxed saved using the hit and run technique.

However, Joshua is looking to make a big return to England with a spectacular knockout in his upcoming mandatory defence against IBF No.1 Kubrat Pulev on June 20th .

“You will see one of the best AJ performances – the shackles are off from the Ruiz Jr 2 fight in terms of being disciplined and following a game-plan,” Hearn told Sky Sports.
“He can be more destructive in a better stand-up fight. The mind-set is the same and has been the same since day one, with a couple of tweaks. The Ruiz Jr defeat taught him not to be influenced by outside noise. Stay focused, look after yourself, be selfish. He gave time to everybody but this is an unforgiving sport and you’ve got to look after No 1. He did that for the Ruiz Jr rematch and he will do it again.
“The Pulev fight is the focus. He has said: ‘You make plans, for me it’s only about Pulev’. I sent him [Pulev’s promoter] Bob Arum’s interview where he said ‘there will be no AJ after June 20 when Pulev knocks him out’. I did that to spark the flames in AJ. We need that. You’ve got to be up for this. Against Ruiz Jr the first time, maybe one of the problems was that the spark wasn’t there. If you take your eye off the ball you will get beaten. With what’s ahead, we can’t afford to lose. He’s doing everything to put an unbelievable performance together on June 20.”