Skip to content
HomeSports NewsAdam Kownacki – Robert Helenius Hit Me With A Good Shot, It Wasn’t My Night

Adam Kownacki – Robert Helenius Hit Me With A Good Shot, It Wasn’t My Night 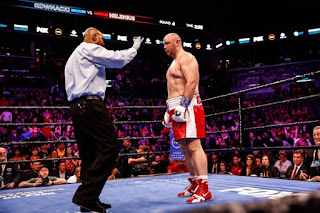 Robert Helenius (30-3, 19 KOs) upset odds with a fourth round knockout victory over Polish rising star Adam Kownacki (20-1, 15 KOs) in their WBA Heavyweight title eliminator which aired live on FOX Sports and FOX Deportes on Saturday night at the Barclays Centre in Brooklyn.

Kownacki was way ahead on the score cards and looked most likely to score a Knockout before being dropped with the big right hand that dropped him, dis-stabilized him and rendered him Vulnerable to subsequent attacks from Helenius.

“I want to thank everyone who gave me this opportunity,” said Helenius. “Kownacki is a tough fighter. I worked hard in training camp and it paid off.”

Kownacki, was fighting for the 10th time in front of his hometown Fans at the Barclays Centre in Brooklyn, but that didn’t stop him from getting hurt by a big shot from Robert Helenius early in the fourth round. A right hook and a left right hook sent Kownacki to the canvas, signalling the beginning and the end of the fight.

“I knew that I hit him hard and I knew I just had to continue,” said Helenius. “I knew he was still hurt after that punch.

“Kownacki just kept coming and coming. He’s a good fighter I have to give it to him. My strength is to punch back when people come at me. It was a good fight and a tremendous opportunity for me to be here.”

Adam Kownacki was aggressive from the opening bell, outpacing Helenius and landing 84 punches as compared to Helenius 49 by the time of the stoppage but it was the relentless flurry from Helenius in the fourth round made the difference in the fight.

“It wasn’t my night,” said Kownacki. “It’s boxing. It’s a tough sport and things just didn’t go my way tonight. It was a learning experience and I’m going to go back to the drawing board and get back to work.
“He hit me with a good shot. I knew what was going on, but I’m just upset with myself. It is what it is.”