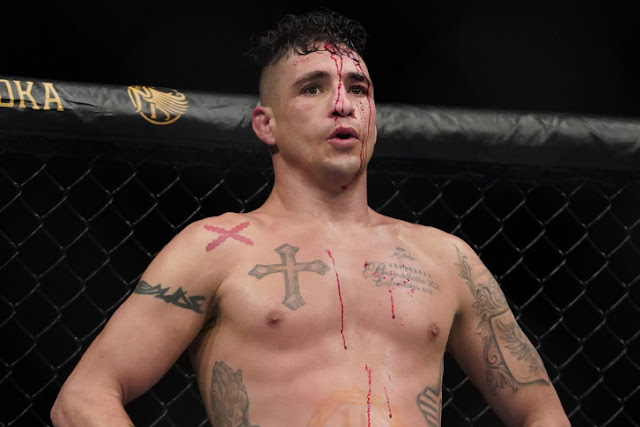 Diego Sanchez defeated Michel Pereira via disqualification on Saturday night in the Co Main Event of the UFC on ESPN+ 25 fight Card at the Santa Ana Star Centre.

Pereira (23-11 MMA, 1-2 UFC) basically handed down a beating to Diego Sanchez for majority of the fight and despite having a few opportunities of his own, Sanchez (30-12 MMA, 19-12 UFC) couldn’t match the dominating Brazilian. Sanchez was constantly being stalked around the octagon and backed up against the cage. Wicked knees constantly got connected in the first and second round.

The third round was totally one sided with Pereira landing numerous hard knees and dropping him to the canvas. Sanchez took one more knee and that was a low blow as Sanchez was down at the time the knee connected.

The bout was immediately halted and the ringside referee sent in to examine Sanchez,who seemed ok but had a cut on his head and complained he had blur vision making him unable to continue the fight.

The 38 year old veteran Sanchez is now on a three fight winning streak with the win, while Michel Pereira is now on a two fight losing streak after losing his last outing to Tristan Connelly