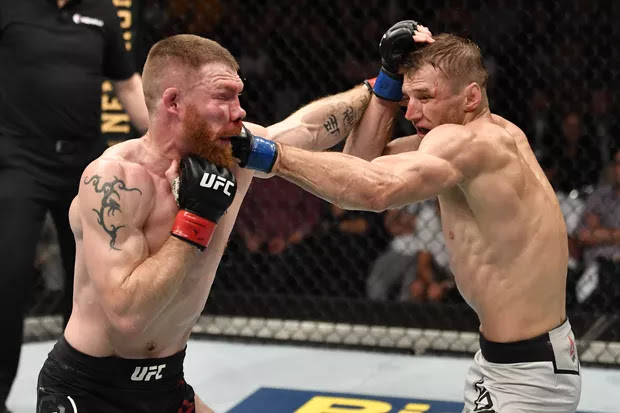 Lightweight Contender Dan Hooker picked up a crucial split decision win over Paul Felder in their UFC on ESPN+ 26 main event clash in front of his hometown Fans on Saturday night at the Spark Arena in Auckland, New Zealand.

Dan Hooker and Paul Felder engaged in some serious five round war in the which ended with a split decision win for for the Homeboy with two of the Judges scoring the fight 48 – 47 for Hooker while the last judge gave the same score to Paul Felder.

By the fifth round both fighters were all spent, battered, bruised and gave their all in the fight and this all started with a huge tension between the fighters between both fighters which made them refuse to touch gloves before the opening bell.

Hooker’s game-plan was very evident from the opening bell which was to gradually break down his opponent some thing evident in his repeatedly slammed his shin into Felder’s calf causing significant redness and bruising on his lead leg and by the end of the first round Felder’s eye was already swollen. He also did well avoiding being caught by Felder’s power punches and always countered with a jab.

The swelling on Felder’s face directly hampered his sight throughout the remainder of the fight and to worsen his sight issues, Hooker kept on peppering Felder and caused  some visible damage as punches keep connecting on his face round by round.

Felder returned in the second round with some responds,firing power punches at Hooker and even snapped his head backward with some stuff shots that couldn’t go un-noticed in the eyes of the judges scoring outside the Octagon.

Hooker kept going for more in the last round despite showing signs of slowing down and while taking shot he immediately replies with one or two of his own and that indirectly affected the scoring of the fight coupled with a late takedown after sneaking through Felder’s defence.

Both fighters shared a hug after the fight but after the scores were read out, it was only Hooker who celebrated while Felder began loose his gloves and gave some hints about retirement.

“I knew it was close,” Felder said following the fight. “He busted me up pretty good.
“That might be it for me. I’ve got a four-year-old at home that misses me every time I go away like this.”