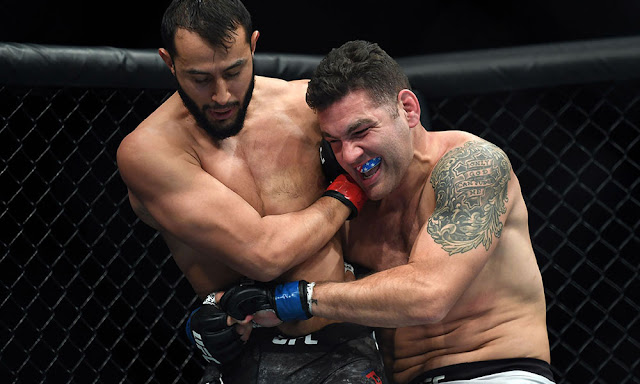 UFC light heavyweight champion Jon Jones will be defending his title against an Undefeated challenger in Dominick Reyes, who stands a chance to execute a massive upset in the main event of UFC 247.

However, Chris  Weidman  was stunned via first round Knock Out against Reyes, believes that an upset will be witness when both share the Octagon in the main event of UFC 247.

“I got Reyes winning by KO,”

Weidman has been on both sides of an upset , having knocked out a prime middleweight champion in Anderson Silva to claim the UFC middleweight title and even defeated Silva in a rematch via Doctor’s stoppage.

Despite the dominance Jones is currently enjoying in the light heavyweight division , Weidman still sees a possibility of an upset and gave his reason ,when his opinion was questioned by a fan on Twitter.

“Delusional? Can I not have a opinion?” Weidman tweeted in response to a follower criticizing his pick. “Do you think Jones is unbeatable? That would be delusion.”
“Anderson was the GOAT at one point too. He got KOed. Not far fetched.”