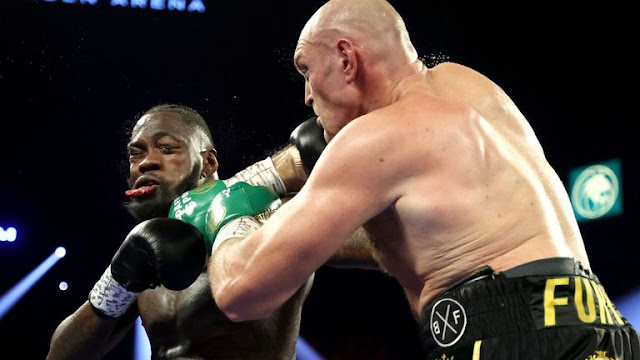 Tyson Fury defeated Deontay Wilder via a seventh round Knock out to become the new WBC heavyweight world Champion at the MGM Grand Arena on Saturday night.

Fury delivered his promise of defeating Wilder with a knockout despite being considered a lesser puncher when compared to the Former WBC heavyweight champion Deontay Wilder.

Fury was clear on his intent from the opening bell, aggressively firing down at Wilder,who never really got into the fight. The fight seemed already concluded after the Brit landed a big left and a short right hand hurting the American in the second round.

Fury continued the unslaught in the third round eventually sending the Champ to the Canvas and while trying to get back on his feet, He dropped again but that was ruled a slip

Wilder was totally bloodied, blessing from his nose, ears and was again found on the canvas  in the fourth however, this was ruled a slip but it was evident Wilder had nothing much to offer as he was everywhere and moving around with shaky legs.

Wilder looked slow and seemed to be fighting on instincts while Fury just kept hammering him with combinations that ended up sending him to the canvas in the fifth eound. This time from a body shot.

Wilder made it to the second half of the fight but looked absolutely spent, bloodied, bruised and offering nothing with the ropes serving as a huge support while Fury kept on compounding his misery with punches coming from both hands.

Wilder’s corner threw in the towel in the seventh round after Fury landed a series of un-replied flush right hands leaving the Americans no choice but to end the one sided beatdown.