Skip to content
HomeSports NewsTyson Fury – I’m Knocking Out Deontay Wilder, I Have 21 Of Them

Tyson Fury – I’m Knocking Out Deontay Wilder, I Have 21 Of Them 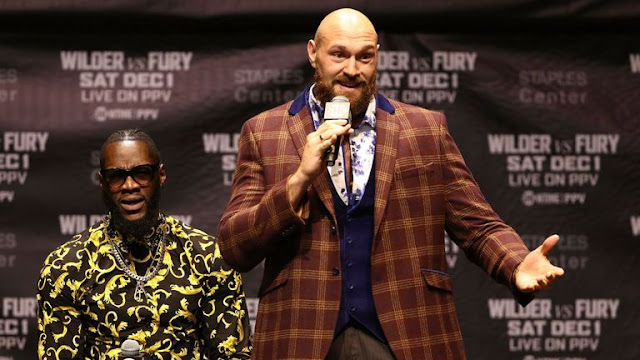 Former World Champion Tyson Fury has maintained He will be knocking out WBC heavyweight champion Deontay Wilder in their rematch on the 22nd of February at the MGM Grand in Las Vegas.

Deontay Wilder and Tyson Fury both fought to a controversial split draw in the first fight back in December 2018 at the Staples Centre and ahead of the rematch, Fury has gone on to make some significant changes to his team ,taking out trainer Davidson and bringing in Sugar Hill.

Tyson Fury made these changes because he believes he got robbed in the first fight and will like to end the fight within the distance.

“They had to rob a man who had been out of the ring for three years and they still couldn’t beat him. I’m not coming here for a points decision, I’ve had too many of them – nine of them – I’m coming here for a knockout, I’ve had 21 of them and from the heart that’s what I’m looking to do.‘his is why I employed Sugar Hill. If I didn’t want a knockout, I wouldn’t have hired a Kronk trainer. If I didn’t want a knockout, I’d have kept Ben Davison and working on that herky-jerky style,” Fury told Gareth Davies.

Fury seems willing to take necessary measures to make his dream come to fruition and has also admitted taking some advice from fellow stablemate Joe Joyce in a bid to make the skin around his fist stronger ahead of the fight.

“I was speaking to an old legendary bare-knuckle fighter from the travelling community, he’s called Big Joe Joyce,” Fury said.
“He told me about dipping his hands in petrol, to toughen them up. So for this fight I’ll be dipping my hands in petrol for five minutes a day during the last three or four weeks of the training camp to really toughen them up. It worked for him, so I’m going to give it a try.”

Since their first meeting both fighters have taken on different levels of oppositions Wilder taking on a mandatory fight and gave Luis Ortiz a rematch while Tyson Fury faced Tom Schwartz and Otto Wallin in his two fights ahead of the rematch .