Tyson Fury Believes Deontay Wilder Is Nervous Ahead Of Rematch 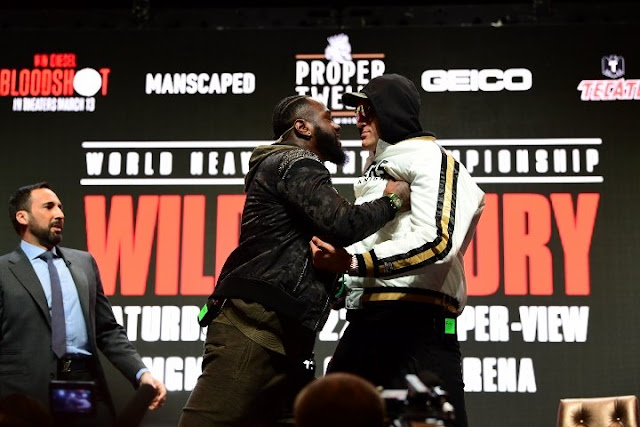 Former Unified world champion Tyson Fury believes that from Deontay Wilder’s reaction during the their faceoff on Wednesday, that the WBC champion is “Very Nervous” ahead of their heavyweight championship rematch today at the MGM Grand Arena.

During the press conference ahead of their fight on Wednesday,both fighters almost came to blows when they faced off and had to be separated and for that according to Fury is the perfect sign of nervousness.

Tyson Fury and Deontay Wilder both fought to a controversial split draw in their first meeting, after the Brit out-pointed the Alabama knockout artist throughout the fight but Wilder equalised with two brutal knockdowns in the ninth and the final round respectively to steal a controversial draw.

“Wilder is very nervous. I can see his jumper going in and out from the big heart beat pounding out of his chest,” Fury said.
“He’s terrified. He’s nervous as hell. He doesn’t know what to expect, and he’s getting knocked out.”

The rematch will be officiated by non British official. However, the Brit says he doesn’t care about the those choosen to officiate the fight because he will be going into the ring for a knockout and not a decision from the judges.

He maintains that it’s no secret, he wants to knock out the American in their rematch and says it’s the bases behind his switch to Sugarhill and return to the Kronk.

“Kenny Bayless is a top referee; he has refereed me before and he did a good job. I have no objections with the referees and judges, whoever they are they are, they will do a good job,” Fury said.

“It’s been no secret that I’m looking for a knockout. That’s why I hired Sugarhill and went back to Kronk. He gets you to sit down on that big right hand, and that’s the game plan.”

“What I did last time clearly was not good enough, and what better club to go to than Kronk? I know they can bring out of me exactly what I need for this fight.”