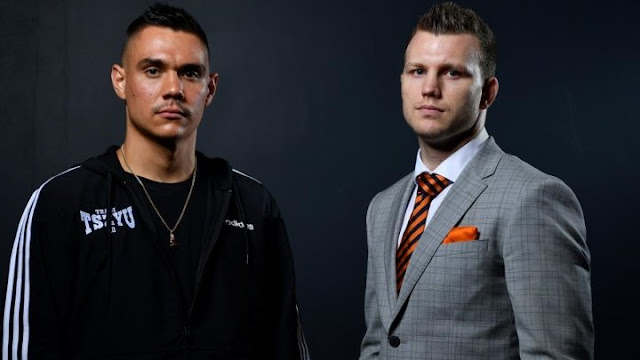 Australian prospect Tim Tszyu has blasted his upcoming opponent Former WBO welterweight Jeff Horn saying he has no boxing skills and isn’t even among the world class boxers.

Many boxing expert believe that Tszyu will be facing the well tested Jeff Horn too early on his professional career but Tszyu disagrees with every one on that and claims Horn is only but a stepping stone in his career.

“I knew I was going to beat him from the first time I saw him,” Tszyu told AAP.
“We could have fought last year and I could have beat him, I believe, I’m ready now. I don’t think he’s got much boxing skills, beside his physicality, that’s all.”

Tszyu, who is 7years younger than Horn is totally confident ,he will be knocking out Jeff Horn when they both share the ring on the 22nd of April in a 10 round super welterweight clash in a venue to be announced sometime in the future.

Horn will be taking a trip back to Super welterweight after avenging his knockout loss to Micheal Zerafa with a decision win in December, which had also left him with a minor Achilles tendon injury which he believes won’t bring up issues ahead of their fight in April.

“Haven’t watched it — I was sunbaking in Hawaii,” Tszyu said. “I had better things on at that time. I like big boxing fights — not little local ones like that. It didn’t really interest me.”

Tim Tszyu doesn’t believe Jeff Horn is a world class fighter and only sees him as a route to bigger fights in the future despite his recent accomplishments and the opponents he has faced.

“Jeff Horn, I don’t think he’s world class, just under,” Tszyu said. “He’s a stepping stone for me. I have a few fights to get through this year. I’ve got world titles to win. He’s 31 (sic), he wants to drag it out. I’m young: I’ve got the whole world ahead of me.”