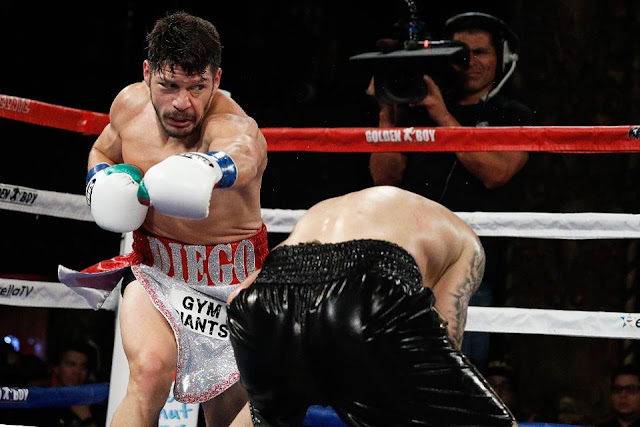 Two time title challenger Diego Magadeleno got back to winning ways with a hard earned 10 round unanimous decision win over hometown favourite Austin Dulay on Saturday evening at Bridgestone Arena in Nashville, Tennessee.

The fight was scored 97-91 twice and 96 -92 all in favour of Magadeleno after the lightweights battled to the final bell.
Despite fighting in an unfriendly environment, Magadeleno tried embracing the environment and literally tried stealing the show with how entrance but despite failing to be successful with that,was able to take home the victory and celebration from the home crowd.

“Experience has everything going for me,” stated Magdaleno, whose three losses have all come to title-fight level opposition. “In my previous fight (a one-sided 7th round knockout loss to Teofimo Lopez, now a lightweight champion), I lost my head. This time I took my time. My camp said slow it down. Happy for the victory tonight.”

The fight between the veteran boxer and Dulay kicked off to a slow start in and while Magadeleno tried getting his range and game on track , Dulay started out aggressive and was able to draw a huge reaction from the crowd with a  left hand which landed flush on the former title challenger.

Magadeleno tried turning things around in the fourth round by fighting behind his jab and moving linearly forward but Dulay used movements, circling to the left and avoid making the former title challenger unable to commit to his punches.

Despite the defensive techniques applied by Dulay, Magadeleno was able to close the distance more frequently than in the early rounds and even close enough to send the 24 year old to the canvas but that was ruled a low blow by the referee and accompanied by a stern warning.

Magadeleno finally picked up the pace in the sixth round giving his younger opponent enough problems with his mid round adjustments and finally scored the first knock down of the fight with a body shot but the home boy tried a low blow plea and even that was ignored ,with the referee handing him the mandatory eight count.

Magadeleno was ducked a point for a low blow in the eight round and that was enough lessons to be learner by the 33 year old, who kept his hands high afterwarda. Dulay later landed a one two combination that drew an audible responds from the hometown crowd after realising ,he might need a late rally to win.

Magadeleno was able to land as much as double the amount of punched landed by Dulay all through the fight. Dulay finally took up a full ten seconds to land an impressive flurry but that alone couldn’t turn around the deficit on the score cards.

“I knew mentally I could break him down,” insisted Magdaleno, who picks up his first win in 17 months as he improves to 32-3 (13KOs). “If I attacked the body I knew I could break him down. He’s a young prospect. He’s taller than me so my plan of attack was to get in close and go to the body.”

However, the youngster only complained about low blows, claiming he was constantly being hit by Magadeleno and even exaggerated being hit on his back.

“I absolutely won the fight,” insisted Dulay, who falls to 13-2 (10KOs) with his second loss in five fights. “Every round he was hitting me low and in the back and on the hips. It was more times than he got called for. I won that fight 100%.”