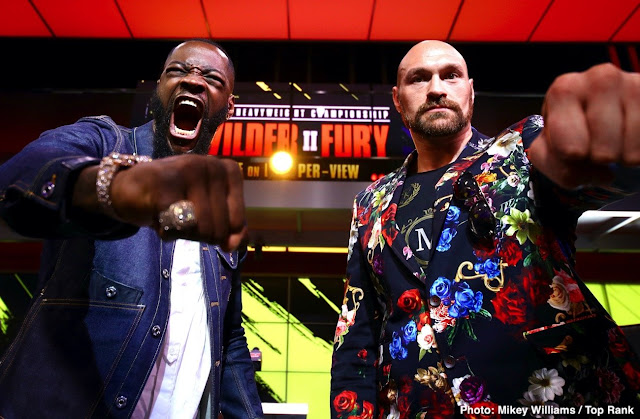 The WBC Heavyweight Champion Deontay Wilder will be defending his belt against Tyson Fury in a rematch of their first fight but this time will weigh in heavier and stronger than his first fight according to his trainer Deas.

The knock out artist was significantly smaller than his foe and his weight was almost a Cruiserweight in the ring against a Fury ,who was overweight. Wilder weighed in 212lbs in their first meeting but Deas believes that Wilder will still  be bigger and stronger in the rematch.

“One of the problems with the first fight is that Deontay was so excited that he wasn’t eating right. He came in unusually light,” Deas told Sky Sports.
“He was 209lbs (14st 13lbs) on fight night – by the time he knocked Fury down in the last round, he would have been a 200lbs (14st 4lbs), essentially a cruiserweight.
“We don’t want that. We want Deontay to be bigger and stronger.”

However Peter Fury, who trained Tyson to his achievements against Former Heavyweight world ruler Wladimir Klitschko back in 2015also shares the same opinion.  He said Tyson will own the advantage on fight Night, if Wilder decides to go into the fight with the same weight he did in theie first meeting.

“If Wilder comes in at the same weight he did in his last fight, I think that’s a big advantage for Tyson.
“I think Wilder came in under weight for that fight.
“Take him into a bit of a dogfight and sap his energy, especially in the second half of the fight.
“He’s got to use his size, he’s got to use his weight, especially if Wilder is coming in roughly the same weight he was.”

After the exploits against Klitschko back in 2015 , Tyson Fury took an almost three year abs nice from the sport before returning against Deontay Wilder in December 2018 with Ben Davison as his head trainer and for the rematch, he parted ways with Davison and brought in Sugarhill Steward.

According to Deas ,the change definitely plays in favour of Wilder as factors such as chemistry be difficult to develop in such a short period.

“Any time a trainer and a fighter who have done such wonderful things together split, it has to be an advantage for the next opponent.
“Chemistry is not an overnight thing.
“Ben was not just Tyson’s trainer – he was a brother, confidant, friend, therapist. Those kinds of guys don’t come along every day.
“I think a lot of Ben – for someone as young as he is, he is incredibly knowledgeable and strategic. He picks up on intricacies and nuances better than people who have been in this game for decades. Ben’s potential is unlimited.
“I enjoyed the challenge [against Ben]. I know Ben saw every tiny detail, so I had to do the same.”