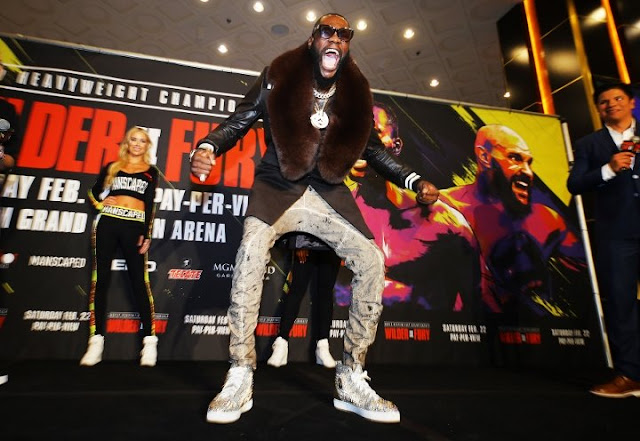 Deontay Wilder plans surpassing Mohammed Ali’s of 10 as successful heavyweight title defences when he defends his WBC title for the eleventh time in his rematch against former world champ Tyson Fury thus weekend at the the MGM Grand Arena on Feb. 22nd.

Deontay Wilder, who won the title five years ago by defeating Berm sterv has promised to handle Tyson Fury in a better fashion this time despite battling to a split draw in their first fight back in December, 2018.

“It will be an amazing feeling, my 11th consecutive defence,” Wilder said to BBC 5 Live Boxing.
“It was a basic plan for me to get into boxing, become a journeyman and make a few dollars for my daughter.
“I never thought about being heavyweight champion of the world and being tied with my idol Ali.
“Once I’ve beaten Fury with a devastating knockout, I will go on even further to break the record and do more amazing things.”

The knockout artist from Alabama has defeated 41 opponents via knockouts in 42 wins and his draw to compliment his five y at reign as an heavyweight title holder but sees his rematch with Tyson Fury as the biggest fight and the one which definitely propels him into superstardom.

“It’s been tough being here in America when your sport is not top of the podium.
“One of my guys described this as like a Floyd Mayweather v Manny Pacquiao fight because of all the calls coming in for tickets.
“It made me feel good – but I have to keep my head, stay focused and deliver on Saturday.
“This is what I have always wanted and my moment in time has come.
“It took a long time. I can smile and say I will not disappoint come Saturday night.”