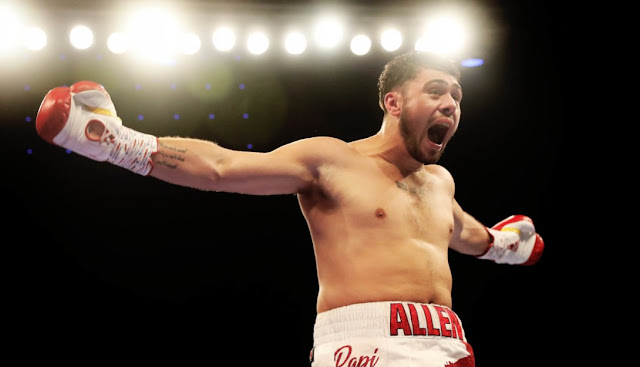 David Allen made a massive return to the boxing ring after with a 10 month absence with a three round destructive victory over Dorian Darch on Saturday night at the Sheffield Arena in Sheffield, England.

The fight which started laboriously for Allen, later opened up for the Doncaster fighter flooring Darch thrice en route to the third round Knock out victory at exactly 0:53 of the third round.

Allen (18-5-2, 14KOs) was fighting for the first time since his losing via TKO to fellow countryman David Price in July, a fight that saw him get hospitalised and despite having options for a return in late 2019, He opted to stay out till the new year before his return.

Allen showed he was classes above his opponent from the opening bell flicking a few Jabs and connected a few short right hands ,while getting his foot work on track in the first round. However, Darch welcomed the invitation to make the fight a brawl and fired back in the second round but that only brought David Allen back to life.

Immediate Allen got ignited ,Darch couldn’t handle what he asked for as He got sent to the canvas seconds later and after he managed to reach his feet , the end felt so near. Allen complimented his effort early on with a series of left hooks that sent Darch crashing down to the canvas.

The win was Allen’s first win since knocking out Former champion Lucas Browne back in April and the fight was part of the Kell Brook  DeLuca (24-1, 13KOs) Undercard.