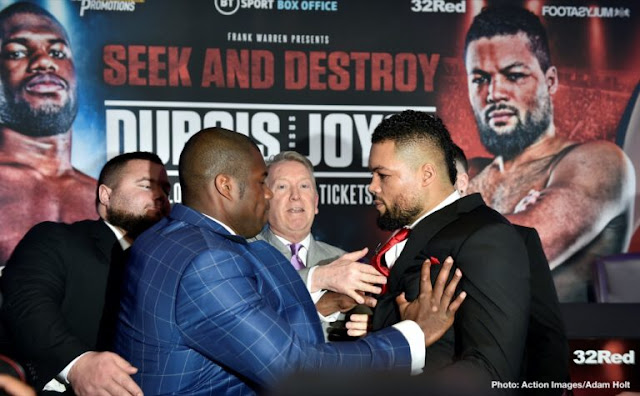 The British boxing fans will brace themselves for an anticipated clash between two unbeaten knock out artist Daniel Dubois and Joe Joyce as announced last week by Franck Warren.

The explosive encounter which promises a knockout even before the build up is set to go down as one of the biggest fights to make for the British fans right now and will be going down at The O2, London on Saturday April 11, live on BT Sport Box Office.

The build up got on the way with both fighters first meeting on Good Morning Britain and both  giving in their piece a promise of a KO. Dubois (14-0, 13 KOs) boldly said  “I’m going to put you to sleep, bring your sleeping bag.” and Joyce snapped back ”He going to get knocked out. All my opponents have had winning records, who has he fought?”

The Pair also met on Good Morning on Talk Sports, where their back and forth word battles continued and both ended the meeting both a face off on the Balcony of the News Building before meeting again in a packed press conference in the BT Building.

“I am confident in myself. He’s going to turn into an old man in the ring. You’re going to see him deteriorate, big time. He is making statements but I will prove myself to the world. I see a massive target and I’m gonna let loose. I am going to dominate, move up the ladder and all his fans will become mine after the fight,” Dubois said

“He is getting destroyed — knocked out. This is a new chapter, the next step in my career. I have got to move through Joe, take him out in good fashion and move onto the world. My Dad set me on this journey when I was a young kid and these are the nights we speak about every day. He is going to sleep and taken out in devastating fashion. He will need that sleeping bag. I won’t miss him because he will be there and he’s getting wrecked. Joe is going down.”

Daniel Dubois and Joe Joyce both have a combine 24-0 record with 22 combined knockouts and each going the distance ones since turning Pro. Dubois will have an athletic advantage as he is only 22, more than 10 years younger than his opponent.