Celeb Plant Outworks and Stops Vincent Feigenbutz In the Tenth Round 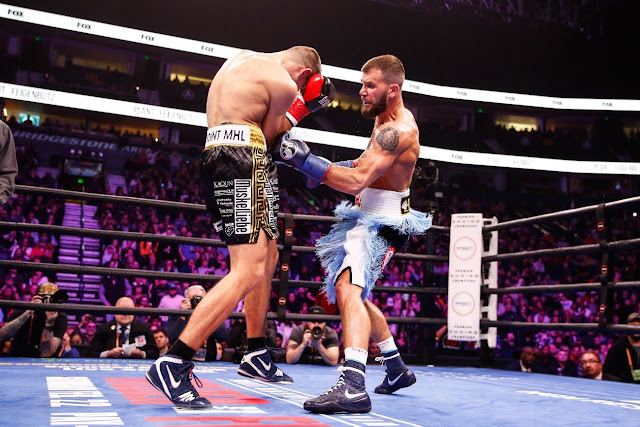 Super middleweight titlist Celeb Plant fulfilled his promise, making easywork of his overmatched mandatory challenger Vincent Feigenbutz,stopping him in the tenth round to retain his title in front of his hometown Fans in Nashville.

Plant,who was defending his title for the second time gradually broke down Feigenbutz and in the 10th round destroyed all his defences, forcing a stoppage with a flurry that forced the referee to intervene at exactly 2:23 minutes of the 10th round.

The challenger Feigenbutz,who was fighting in his first career fight struggled while fighting defensively while Plant fighting behind is jab, picked him apart,landing many shots and bloodied his nose in just two minutes into the fight but that only caused little or no reaction from the crowd.

The titlist continued his dominance in the second round and finally forced the first reaction from the crowd when he blasted the German challenger with a flurry as he repeatedly pumped out his jab, forcing Feigenbutz to cover up.

The combinations of the flurry was always working wonders on Feigenbutz, with Plant adopting the same routine in the third round , mixing uppercuts in his mode of attack, forcing the German into troubled waters with a left hook to the body and complimented it with a right uppercut to the chin living it to settle on his fans, who started screaming “let’s go Sweetlands” and “USA”.

Plant started round four with a right hand and a hook on Feigenbutz’s body, who replied with a few shots of his own and tried to force a brawl with increased activity bit his offensive mode didn’t make any difference as Plant dealt with his charge perfectly.

In the fifth round, Plant had fully settled into the fight causing a lot of trouble for Feigenbutz with his superior hand speed, though he took in all the shots and remained upright with no sign of a knockout.

Plant was briefly sent to the ropes after the visitor made a quick charge in round six but the champion was able to fight off the ropes and immediately forced Feigenbutz back to his desired distance in the centre of the ring. Plant also tried mocking his overmatched opponent but Feigenbutz replied with a blow kiss that drew a responds from the audience.

The Champ slowed down his attack in the seventh round while Feigenbutz landed the most significant shot he had contributed in the fight up to that point. A left hand to the head which the champion took well and moved forward with his attack , connecting tight hand that reignited the backing of the hometown crowd.

Plant returned to full dominance in the eight round connecting a righthand  that opened Feigenbutz for an uppercut he was able to take well but couldn’t offer a reply. The 27 year old, also landed a couple of combinations before the end of the round to force a frustrating look on the champion as he went to his corner.

Feigenbutz was visibly worked-out and the champion noticed that and went in for the knockout, landing a five punch combination, completing them with a left uppercut that forced the crown to their feet but the challenger still managed to stay on his feet. Plant reverted to his jab and landed another combination before the round was over.

Feigenbutz showed heart and continued to hold on in round 10 but was eventually weakened by bodyshots from the champion and fully opened up for a flurry from Plant and after capping it with an uppercut that snapped Feigenbutz head backward ,the referee intervened to stop the fight.

Celeb Plant, with the win improved to 20-0 (11KOs), extending his title reign to 13 months. Feigenbutz on the other hand dropped to 31-3 (28KOs) after his second attempted to win a world title.