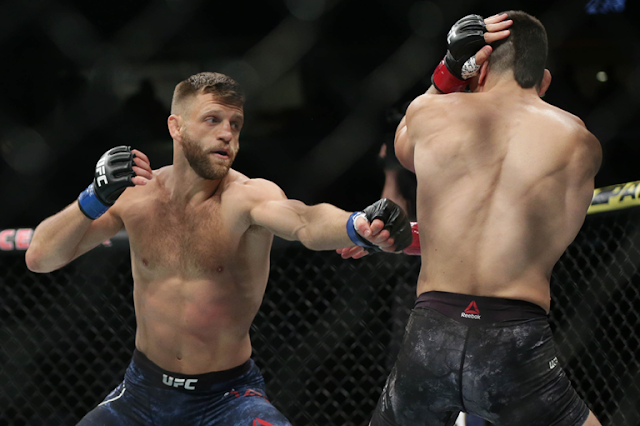 Calvin Kattar takes on Jeremy Stevens at UFC 249 and believes, He is in for an action promising encounter against a top level contender with huge fight ending capabilities.

The fight between Kattar (20-4 MMA, 4-2 UFC) and Stephens (28-17 MMA, 15-16 UFC) will be collide in April and despite being on a three fight losing streak,Katter believes that a win over Stevens will be a big will be a significant addition to his resume.

“Skids can happen when you’re fighting the best guys in the world,” Kattar told MMA Junkie. “I’m sure he’ll be coming out strong like a guy looking to keep his job, and I’ll be there looking to put him away every round. (It) should make for an exciting fight on an already stacked card.”

The fight was initially scheduled to take place in March at UFC 248 but an Stephens got injured which automatically pushed the fight one month further. Both fighters seem to be at opposite points of their career but that doesn’t deter Kattar, who is also coming off a loss against Zabit Magomedsharipov from bouncing back with an impressive performance.

“Jeremy asked for this fight,” Kattar said. “Currently, he’s the higher ranked fighter, so it makes sense for me. But it’s not really about who I’m fighting as much as it’s about going out and competing at the best of my abilities every time I step in there. If I’m able to do that, I’m capable of beating anyone in the division.”

Kattar came up short in his flight halfway across the world against Magomedsharipov. A three round main event fight in enemy territory which ended with h on the losing side despite his late rally but this wasn’t just a loss but a lesson for him.

“I belong in more of those big moments against the best guys in the world,” Kattar said. “I want to earn more of those opportunities, and next time I will capitalize. Whether it’s in home or enemy territory, it doesn’t matter much to me – I feed off both.”

Stephens is on a three fight losing streak but owns a higher ranking and Kattar believes that  a win will definitely lead him closer or even as straight into the title picture.

“A win over Stephens puts me one step closer to the ultimate goal of becoming world champion,” Kattar said. “All 2020, I will be in pursuit of that goal.”