Skip to content
HomeSports NewsTyson Fury 100% Sure, Deontay Wilder Gets Knocked Out In Two

Tyson Fury 100% Sure, Deontay Wilder Gets Knocked Out In Two 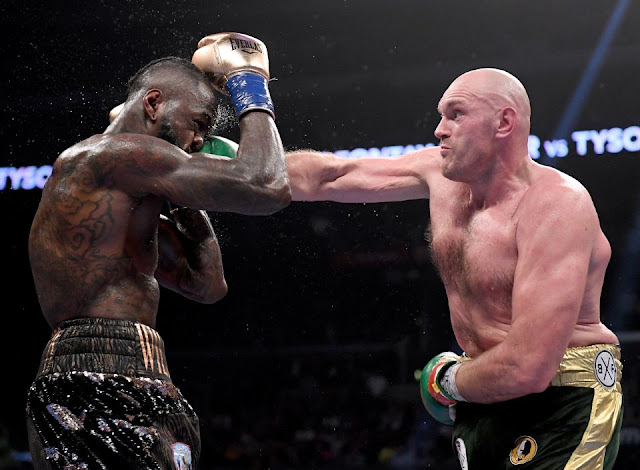 Deontay Wilder and Tyson Fury battled to a controversial split draw or whatever you might want to call it but this time, the two heavyweight kings have an agreement on how they want their rematch to end and that’s within the distance.

Boxing specialists believe the fight boils down to one of two outcomes, either the WBC Heavyweight Champion gets to land his heavy right hand and end the fight via KO or Fury uses his slick boxing techniques to grind out a unanimous decision victory which will also be enough to crown him the WBC Heavyweight Champion, when they meet on February 22nd.

Both fighters did a good job taking out opponents that stood in the way of their rematch. Fury had to dig down  to earn a unanimous decision victory over Otto Wallin and had to do it with a serious cut while Deontay Wilder knocked out Luis Ortiz In the seventh round of their rematch in November.

“Everyone’s talking about I’m going to come out herking and jerking… I’m not looking for herky-jerky,” Fury (29-0-1, 20KOs) insisted during a press conference held Monday in Los Angeles to formally announce the joint PPV venture between ESPN and Fox Sports. “I want him to meet me dead in the center of the ring. Let’s have a slugfest. Best man’s left standing, the loser goes down. I have 20 knockouts in 29 wins.
“He knows he was rocked three or four times in that fight. But I never had the gas to finish him. I’ll be honest and truthful. I didn’t have the gas, after the layoff and the weight loss, I never had the gas to put me foot down. This time, I can turn that screwdriver until he’s done.

Their first meeting came back in December 2018, three fights after his return from infamous 30 month layoff from the Sport.The layoff was due to a failed drug test and later incorporated drug abuse, depression and rehab.

Fury has somehow remained undefeated since his return and has accumulated a 4 – 0 – 1 record. In the Otto Wallin, showed Championship spirit and mentality with a superb second half performance to earned him a loop sided points win over the German. He had also showed his fighting spirit in the first fight with Wilder with his 12th resurrection from Wilder’s brutal Knockdown.

“The fact of the matter is, I’m not going to dress it up, I’m going to speak the honest truth,” insists Fury. “If I’m stupid enough to get hit by that big, stupid right hand, then I deserve knocking out. And it will knock anyone out. He showed, he landed it and knocked me down twice. But it’s not how you go down, it’s how you get up and respond. He knows he’s not messing with no quitter, no shithouse. I’m a fighting man.”

For all that it’s worth, Tyson Fury sent Deontay Wilder the same threats and through that predicted the outcome of his Rematch and has promising action, saying Wilder will only be lasting for less than two rounds in their scheduled 12 round battle.

“I’ll meet you in the center of the ring, Deontay Wilder,” promises Fury. “February 22nd, you won’t have to look anywhere for me. Just watch out for the right hand because you’re going to sleep in two rounds. Two! Two rounds, he’s going down.
“I keep having a dream about two rounds. In poker, I keep getting dealt number two. It’s definitely a thing. He’s getting knocked out in two rounds. 100 percent!”