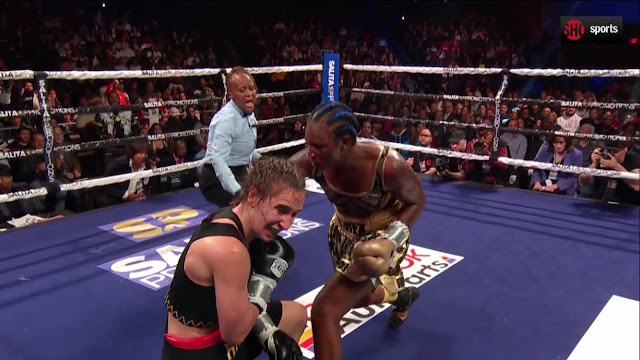 Claressa Shields created a history of her own after fulfilling as promised a one sided beating to Ivana Habazin, dropping Her in the the sixth round and eventually went on to defeat the Croatian via unanimous decision to win the vacant WBC and WBA Junior Middleweight titles with scores 100-90, 99-89 and 100-89 by judges Judges Debra Barnes, Lynne Carter and Robin Taylor.

Habazin started out strongly in the opening round but this didn’t last long as Shields established her dominance using superior speed and skills and ended up controlling the fight with her superior Jab and right hands that by the end of the second round Habazin got frustrated and shoved Shields on the ropes.

Shields couldn’t knock out Habazin but was able to school her, tossing her around the ring though almost got her desire when a body shot in the sixth round sent Habazin down but that wasn’t enough to end the fight and she just couldn’t land another equivalent strike till the final bell but she was able to win, which was just enough to break the record of the Fastest professional boxer to become a three divisional champion and she did it in just 10 fights.

The fight having been twice shifted in the past due to injuries and issues between camps which escalated into a melee that left serious injuries during their October weigh in and ended  up causing the eventual date shift from October to January and after the fight Shield was happy with her Performance despite not being able to score a knockout. Breaking the records held by Vasily Lomachenko (14-1, 10 KOs) and Kosei Tanaka (15-0, 9 KOs) was just enough for her.

“We spent so many months in camp for this fight,” Shields told Showtime’s Jim Gray in her post-fight interview. “It wasn’t what I wanted, but I’m happy with the improvement. This feels great – I did it in 10 fights. Now I’m number one, the fastest boxer in history to become a three-division world champion.”