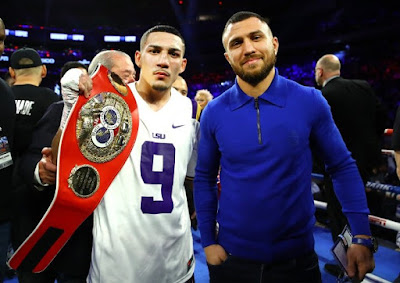 Saudi Arabia is hoping to become a major boxing home after staging the Andy Ruiz Vs Anthony Joshua Rematch last month and according to reports have made an offer to Host the unification fight between Vasily Lomachenko and Teofimo Lopez.

According to Top Rank Promoter Bob Arum the fight could continue as scheduled in April if the location “United States” is retained with New York Venues the The Barclays Center and Madison Square Garden set to battle for the fight.

Saudi Arabia started out hosting the World Boxing Super Series super-middleweight final between Callum Smith and George Groves and have recorded some huge success in the Ruiz – Joshua Rematch , which saw Joshua reclaim his IBF, IBO, WBA and WBO heavyweight titles with a unanimous decision in December.

“Lomachenko is fighting Lopez, that is done,” Arum said “Now the question is the site of the fight.“We have Madison Square Garden bidding against Barclays in Brooklyn and we are also getting a bid from Saudi Arabia to do that fight.“It will be April, or a worst case scenario it would be in May if it went to Saudi Arabia because it would be after Ramadan (the Muslim holy month that finishes on May 23).

The Two time Olympic gold medalist from Ukraine and three division titlist will be looking forward to become an undisputed lightweight champion when he shares the ring with the 22 year Old IBF lightweight champion Teofimo Lopez in April. Lomachenko has the WBO, WBA and WBC titles, while Lopez stopped Richard Commey in December to win the IBF belt.

Both fighters aren’t in the same realm when it comes to experience as the two time gold medalist has faced better opposition than the Lopez and his Amateur experience is a river compared to a pond in Lopez’s case. However, they both have 15 professional fights under their belts and will both stand a chance at undisputed status come April.

“Lomachenko has all these young guys [wanting to face him],” Arum said. “The Lopez fight is a hell of a fight.”
When asked whether Lopez was ready to face a boxer like Lomachenko, Arum replied: “Lopez thinks he is. Lopez is the kind of fighter than really surprises everyone. I was shocked with the Commey fight, I thought that was a long difficult fight.”