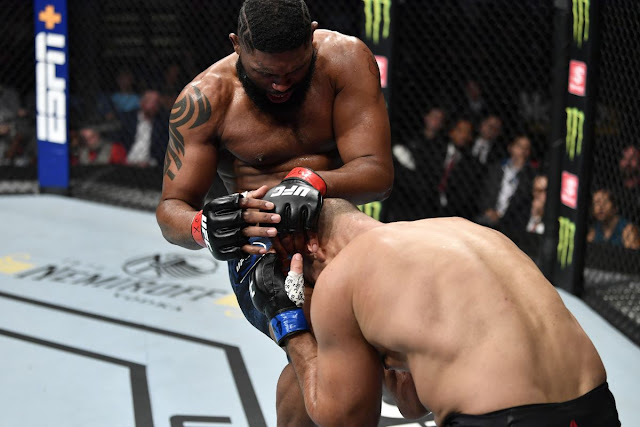 Curtis Blaydes ended Junior Dos Santos with a stunning 2nd round knockout in the main event of UFC Raleigh on Saturday night at the PNC Arena.

Blaydes (13-2 MMA, 8-2 UFC) known for his take down and grappling ability landed no takedown on his way to the victory. He opted to trade bombs with former Champion Dos Santos and sequentially ended the fight with one huge punch.

“I feel great,” Blaydes said in his post-fight interview with Daniel Cormier. “Going against a guy like Junior, a legitimate legend, one of the OGs of the sport, was an honor. But to get the W in the main event, with the way I did, I couldn’t be happier.”

The fight started out with a feeling out period before Blaydes forced for a couple of take down the former champion was able to defend against and gaining confidence from that, Dos Santos forced some exchanges with both failing to commit and being very cautious will doing so. Blaydes forced for another take down which Dos Santos defended well but as forced to the fence and in the process was caught in the groin by Blaydes and the referee had to momentarily stop the fight. After the restart, Dos Santos was a little mobile but Blaydes was still able to land a couple of punches.

In the second, round Blaydes went out firing long straight punches that forced Dos Santos into the back foot and in that couldn’t find his range. Blaydes landed a huge right that wobbled the former champion and noticing that, he complimented his punches with a couple of knees, the followed up with a flurry that forced the referee Dan Miragliotta to end the fight at a exactly 1:06 minutes of the second round.

Curtis Blaydes has won nine out of his last 10 appearances and believes that his win over Dos Santos should earn him a title shot.