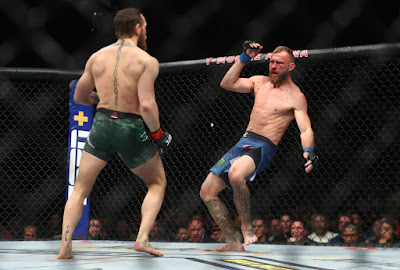 Former UFC two division champion Corner Mcgregor returned to winning ways with a 40 second stoppage victory over Donald Cerrone in the first round of their UFC 246 main event clash on Saturday night at T-Mobile Arena.

The Irish Star came into the fight firing , making his intent known from the opening bell and despite starting out with an aweful miss which invited a clinch from the then crouching Cerrone. The fighters clinched with Conor trying to pull away with shoulder shrugs and after the separation, Cerrone fired a leg kick that didn’t seem to affect Mcgregor but that was all Cerrone could do as Mcgregor connected  a leg kick that stunned Cerrone then followed it up with a series of shots that eventually backed him up on the cage and sent him to the canvas.

The fight was then a spiral downwards after that, as Mcgregor kept hammering at Cerrone with left hands to the head, giving him no chance of a recovery till the referee Herb Dean came in to stop the fight before Cerrone conceded more damage.

Conor Mcgregor got his first victory since November 2016 and was fighting for the first time since losing his lightweight championship fight against UFC lightweight Championship with Khabib Nurmagomedov in October 2018 at UFC 229 , which was marred with a post fight melee that ended up with Lawsuits and suspensions that kept both fighters out of the Octagon.

Before the fight,some MMA Experts predicted Conor Mcgregor had the highest probability of ending the fight early and that was proved right as He totally dominated and pressured Cerrone to the amazement of the Fans and the MMA community. Cerrone was only able to throw one punch and a leg kick throughout the fight.

Conor Mcgregor will now look to get his career back on track after failing to record a victory in about four years coupled with less being less active and fighting only ones in the Octagon since then. Right now there are options all over for him in the Lightweight and Welterweight divisions.