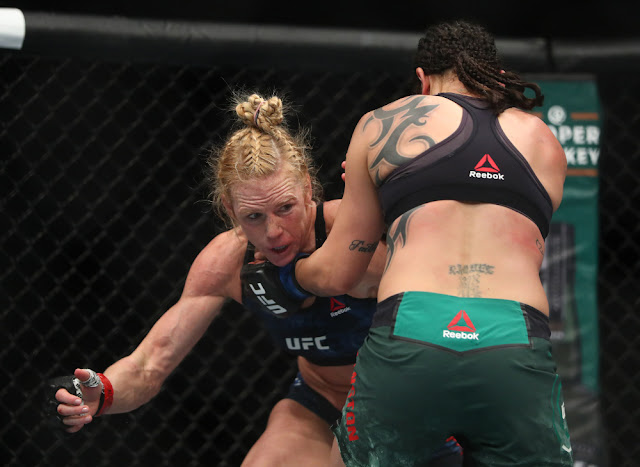 Over the weekend, Holly Holm got her self back to the winning column with a totally tactical display to earn a decision against Raquel Pennington on a UFC 246 main card on Saturday night at the T-Mobile Arena.

Holm, lost her last appearance in the Octagon via knockout to reigning Bantamweight titlist Amanda Nunez forcing her into desperate measures to get back to the win column, which was clearly evident in the fight while she out-worked and outpointed Pennington to a three round unanimous decision scored 30-27, 30-27, and 29-28 all in her favor.

“I really do wish I would have struck more with her. She’s tough. You never know where she’s going to take the fight,” Holm said afterwards. “We have a victory but I still really want to do a lot better than my performance tonight.

Holm muscled Pennington around the Octagon ones she has engaged the clinch with her head placed on Pennington’s chin to avoid strikes from her opponent and ones they got separated She lands a series of quick combinations before going back to using the clinch.

The Fans expressed their displeasure with a chorus of boos after the final bell was sounded but Holm had done enough to win the fight which was a rematch of her Victory over Pennington in her debut back in 2015.

Holly Holm has lost her last four title Fights but strongly believes She can still become a champion before her career runs out.