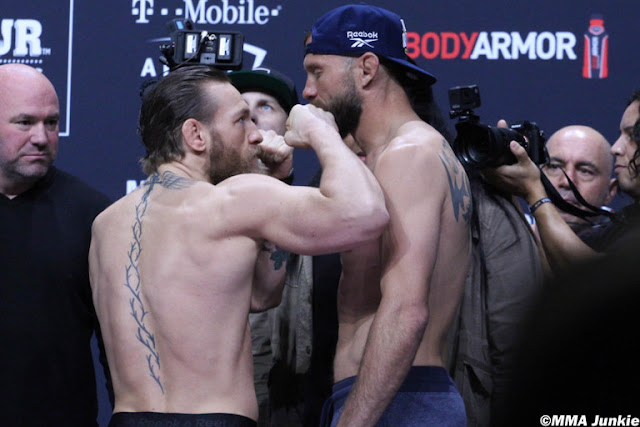 The Biggest MMA Promotion on the planet  Ultimate Fighting Championship (UFC) hits Las Vegas with on of the most anticipated clashes of 2020. Conor McGregor takes on Donald Cerrone in the Headlining bout of their 246 Mega event which takes place at the T-Mobile Arena on Saturday Night.

The former two division Champion Conor McGregor will make his Welterweight debut in what is to serve as an open door to mega Fights across the welterweight and lightweight divisions. However Conor McGregor hasn’t won a properly sanctioned MMA fight since 2016 and will be fighting for the first time since losing a fourth round submission to UFC Lightweight Champion Khabib Nurmagomedov back at UFC 229.

Donald Cerrone on the other hand is accustomed to the weight class, having fought a couple of time in the past. Despite the little emphasis placed on his future after the fight, Cerrone will be an actual stumbling block to McGregor and could soul all the Irish man plans for 2020. Cerrone fought four times last year, earning a 2-2 record and will look to capitalize on his size advantage.

If you ever miss a thing, don’t you worry as DOPECLICS will bring you the latest results as it happens live from the T-Mobile Arena on Saturday Night.

Tim Elliott shocked the MMA World after recovering from a near KO situation while standing but took up a lot of head shots and should probably work on his defense.

Tim Elliott somehow recovered after being slumped by @askar_mma #UFC246

Drew Dober Drops And Finishes Nasrat Haqparast In One Round

Drew Dober needed less that a minute to finish of Nasrat Haqparast, dropped him with his first punch and finished him on the floor with a flurry.

DREW DOBER COMING UP LARGE!@DrewDober gets it done in 1️⃣! #UFC246